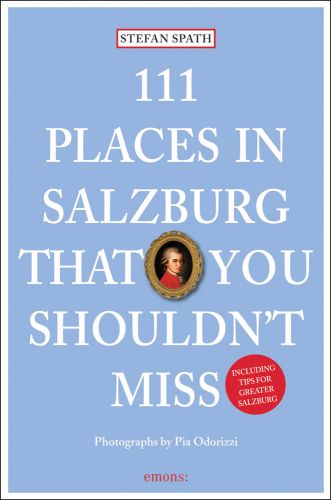 111 Places in Salzburg That You Shouldnt Miss

Amazon UK Book Depository Bookshop UK Hive Waterstones
Log in to add this to your wishlist.
Share This Book...
Full Description
Theatre and pigtailed wigs – there is far more to Salzburg than that, and more than the Salzburg Festival and Mozart, as well. This guide to the more intimate aspects of Salzburg will lead you to places known, at best, only to the natives, and often not even to them – such as a network of medieval tunnels, chamois living in freedom in the middle of town, who just found it too boring in the mountains, even living urban flamingos. There are a surf wave in the Alpine Canal, a quarry yielding one of the most precious kinds of marble in the world, original Celtic witches and druids. This extraordinary guide will tell you which church alter a human skull is walled into, where rallyes run madly around the mountains; about where the Doppler Effect comes from, where the only outdoor organ pulls out all its stops, where defenseless women were burned as witches in the 17th century, which house, with a width of 1.42 metres, is the city’s smallest, where Tom Cruise and Cameron Diaz had a rendezvous – and, finally, where Wolfgang Amadeus Mozart thought up “The Magic Flute”.
About the Author
Stefan Spath, born in Tyrol in 1964, lives in Vienna and works there as a travel journalist, author and copywriter. He first got to know Salzburg at the start of his university studies back in the grey 1980s. Since then he has had an on-off relationship with the city: 'on' in spring and autumn, 'off' on rainy days. Pia Claudia Odorizzi von Rallo, born in 1964 in Wels in Austria, lives and works in Vienna and Upper Austria. For 25 years she has been a freelance photographer in the fields of architecture, art and emotion. Architectural photography is meditative work for Pia Odorizzi. Its challenge is to bring out the clarity and perfection, but also the intention of the buildings. Her work with people takes her from what is visible to what is not obvious. It expresses her personal stories.
Specifications