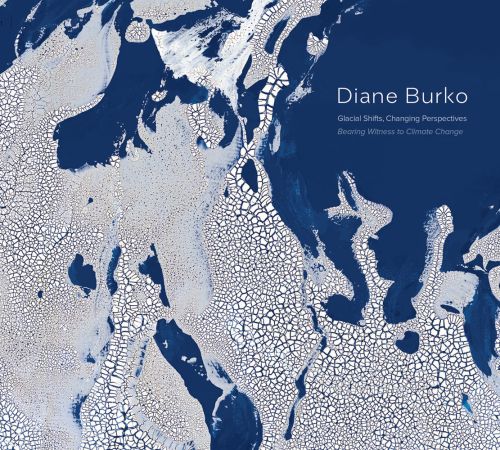 Diane Burko: Glacial Shifts, Changing Perspectives is an exquisitely designed book of paintings and photographs, which documents an exhibition organised by Arkansas’s Walton Arts Center in conjunction with Artosphere, an annual regional festival (4 May – 30 September, 2017) that celebrates artists influenced by nature. During the last decade, Philadelphia-based artist Diane Burko has been documenting the disappearance of glaciers in large-scale series of paintings and photographs developed in close collaboration with glaciologists. In this symbiotic relationship, the artist wants her work to accurately reflect the science and the urgency of climate change, and the scientists want the artist’s help in communicating their findings to the public. The National Oceanic and Atmospheric Administration just announced 2016 was the warmest year on record. Since the 1970s, Burko’s work has evolved from photographing and painting monumental landscapes to documenting glacial recession, using the power of art to capture a harsh reality. Joining expeditions in Svalbard, Norway, Argentina, Greenland, and Antarctica, she has seen first hand the rapid transformation of landscapes essential to life on earth. Her creative response, represented in these pages, compels us to take notice and take action. This book is comprised of both her photography and painting. The book is also beautifully bound and presented, boasting a cloth cover with metallic gold debossing, tip-in photographs on the front and back covers, and foil stamping on the front cover and spine.

About the Author
Carter Ratcliff is a poet and critic. His gallery reviews and writing have appeared in notable art periodicals and catalogues including Artnews, Art in America, and Artforum, His many books include John Singer Sargent (Abbeville Press, 1982); Robert Longo (Rizzoli, 1985); The Fate of a Gesture: Jackson Pollock and Postwar American Art (Farrar, Straus, Giroux,1996); Andy Warhol: Portraits (Phaidon Press, 2007); Out of the Box: The Reinvention of Art, 1965-1975, (Allworth Press, 2001); and Georgia O'Keeffe (Kunstshaus Zürich, 2003). In 1976, he was an awarded a Guggenheim fellowship in fine arts research. William L. Fox serves as the Director of the Center for Art + Environment at the Nevada Museum of Art in Reno. He has published fifteen collections of poetry and eleven non-fiction books about the relationships among art, cognition, and landscape. Andrea Packard has directed the List Gallery at Swarthmore College since 1995 and served as curator for Walton Arts Center 2009-2016. The author of more than 25 exhibition catalogue essays, she has written about diverse artists including Buzz Spector, José Bedia, William Daley, Allison Saar, and Lois Dodd. She has exhibited her own mixed media works in over fifty exhibitions nationally.
Specifications