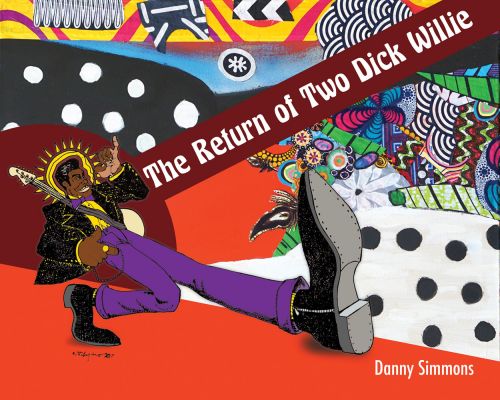 The Return of Two Dick Willie

The Return of Two Dick Willie is the latest collection of artwork and prose by artist/entrepreneur Danny Simmons. Carrying on in the tradition of Romare Bearden and Langston Hughes, Simmons combines his abstract expressionist collages with the colourful saga of Two Dick Willie. Visually stunning and intellectually stimulating, this book captures Simmons’s skill at its finest. Among the most impressive artists of his day, The New York Times says that Simmons “injects freshness” into his abstracts, and that they are “meticulously rendered and decoratively impressive.” Also available by Danny Simmons: Deep in Your Best Reflection ISBN 9780990790822

About the Author
Danny Simmons, Jr., is an American abstract painter from Queens, NY, who once coined his particular style of painting as 'Neo-African Abstract Expressionism'. Simmons' works can be seen all over the world in such prominent establishments as Chase Manhattan Bank, The Smithsonian, United Nations, and more, Many have been obtained by art lovers and renowned celebrities everywhere, including: music industry executive/producer Lyor Cohen, and actor Will Smith, to name a few. Simmons is also the author of five books, the latest titled Deep in Your Best Reflection, an intimate compilation of real-life texts and emails shared with a former girlfriend. He conceived of and co-produced the hit HBO series Def Poetry Jam, which made such as impact that Def Poetry is now offered as an elective at the University of Wisconsin, and won Simmons a Tony Award for the Broadway version of the show. Co-founder - along with his siblings, music mogul Russell, and hip hop legend Joseph Simmons aka 'Rev Run' - and president of the Rush Arts Gallery, Simmons is also founder and VP of the Rush Philanthropic Arts Foundation, a 501(c)3 organisation dedicated to providing disadvantaged urban youth with significant arts exposure and access to the arts, as well as a former board member of the Brooklyn Museum, the Brooklyn Public Library, the New York Foundation for the Arts, and the National Conference of Artists. Danny Simmons holds a Bachelor's degree in social work from New York University, a Masters in public finance from Long Island University, and is the recipient of an honorary PhD from Long Island University. Simmons sits on the Boards of Long Island University, Brooklyn Academy of Music, Brooklyn Bridge Park National Conference of Artists, Hampton University Museum and remains an adviser to the Brooklyn Museum.
Look Inside
Specifications