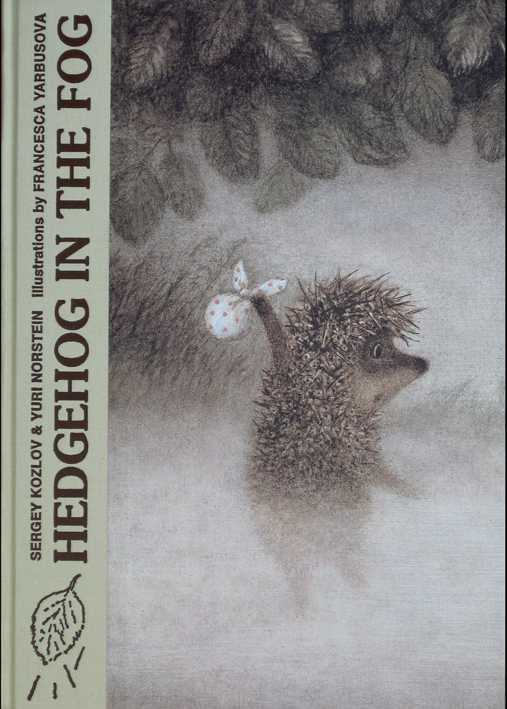 “I’ve loved the films of Yuri Norstein for years now. I first saw ‘Hedgehog in the Fog’ as a film student in the early 1980s and became instantly enchanted. Like many I was immediately drawn into his sensual world by the richness of the aural and visual landscapes he creates. Norstein’s films are magical and atmospheric, lovingly and masterfully executed. His story-telling and illustration style is earthy and rich in symbols which are beautiful in themselves – but one senses there is a lot more hidden behind them.” Nick Park, The creator of Wallace and Gromit and Chicken Run and four times Oscar-winner
Hedgehog in the Fog is an international bestseller which has already been published in many languages. The book is based on Francesca Yarbusova’s sketches to the award-winning animated film directed by Yuri Norstein. It is about the adventures of the philosophical little Hedgehog on his way to meet with his friend Bear. Along the way Hedgehog enters into a mysterious fog in which he encounters a horse, a dog, an owl, and a fish. Also available in the Norstein & Yarbusova Collection – a beautiful series of children’s picture books based on the art of famous Russian artists and animators Yuri Norstein and Francesca Yarbusova are: The Fox and the Hare ISBN: 9780984586714 and Mishmash ISBN: 9780984586745.

Sergey Kozlov is a famous Russian children's writer, poet, and author of many books, songs and screenplays for children. He is the laureate of Russian literature awards. Yuri Norstein is a distinguished Russian animator and director, the creator of memorable and award-winning films. In 1984 his film 'Tale of Tales' was named The Best Animated Film of All Time in an event organised by the American Academy of Motion Picture Arts and Sciences in Los Angeles with critics and filmmaker judges from all over the world. In 2002 this film was also named the best animated film of all time in a Zagreb International Animation Festival poll. In 2003, an international film jury in Tokyo declared 'Hedgehog in the Fog' to be the best animated film of all time. For his contributions to art Norstein received the Order of Arts and Letters (France, 1991), and the Order of the Rising Sun (Japan, 2004), as well as many Russian state and independent awards. Francesca Yarbusova is an award-winning artist, the wife and collaborator of Yuri Norstein. The successes of their films are as much her accomplishments as they are Norstein's. Exhibitions of her artworks successfully showed in museums in Russia, France, Japan, etc. She is the recipient of the Great Gold Medal of the Russian Academy of Fine Art.