Music and the Art of Jean-Michel Basquiat – Montreal Museum of Fine Arts, Canada

Organized in collaboration with the Cité de la musique – Philharmonie de Paris, Seeing Loud: Basquiat and Music is the first large-scale multimedia exhibition devoted to the role of music in the work of one of the most innovative artists of the second half of the 20th century.

A novel perspective on Basquiat’s artistic and musical career

Music holds a prominent place in Jean-Michel Basquiat’s painterly practice in the form of sign, symbol and sound. His oeuvre is replete with depictions of musical instruments alongside references to opera, classical music, jazz, bebop, hip-hop and rap. Presenting some 100 works by the artist together with numerous sound clips, film footage and archival documents, the exhibition provides an innovative in-depth look at Basquiat’s career as a musician, the sounds that accompanied his mark-making and the musicians who inspired him, from Beethoven to the New York underground scene of the 1970s and 1980s and, notably, Charlie Parker, Miles Davis and Maria Callas.

Beginning with an exploration of the music that shaped Basquiat’s New York, the exhibition sheds new light on his career as a performer and musician, notably with the band Gray. It also looks at his painting compositional techniques as they relate to music, and references his ties to particular record labels, musicians, cultures and sounds.

For Basquiat, music was a message about the transatlantic migration of cultural forms and the brutal reality of being a Black artist facing racism. His engagement with the African diaspora and the politics of race in the United States is one of the main threads of the exhibition. Anchoring the artist’s oeuvre in our time, it considers how his works relate to contemporary culture. 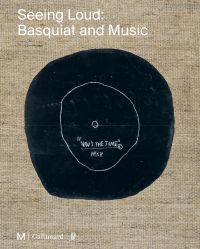