Luxembourg + Co., London, announces the opening of Bad Manners, a survey exhibition devised in collaboration with artist Jake Chapman and dedicated to the role of non-consensual collaborations between artists from the mid 19th century to the present day. From cannibalistic acts of modification of a colleague or predecessor’s work, to changes of signatures, to the confusion of identities between artists or their creations, this show questions the norms of collegial etiquette, originality and authorship.

Marking the historical boundaries of the exhibition are two works. The first is a drawing by Édouard Manet from 1863, depicting his famous nude Olympia gazing directly at the viewer. The second is a watercolour by Jake Chapman from 2021, executed on top of an etching Manet prepared using this Olympia drawing. Symbolising the birth of modern art, Manet’s bold experiments of the 1860s are notoriously invested in the clever contradiction of established conventions. Seen through Chapman’s modified version, however, Olympia and her maid reveal themselves to be just as relevant today, poking at questions of gender, ethnic and class distinction that apply to the subjects of the picture as well as to its previous and new authors.

‘The history of “bad manners”’, argues Chapman, ‘is the history of modern art. The imperative of making something new necessarily at the expense of the old.’ Other works in the show include a table sculpture executed by Martin Kippenberger in 1987 using a Gerhard Richter Grey painting, a collage by Jean (Hans) Arp incorporating parts of Sophie Taeuber-Arp’s work, and a Double Portrait of Richard Prince and Cindy Sherman, executed in a manner that invades and confuses both artists’ methods of production as well as their personal identities.

The exhibition will be accompanied by an original publication tracking the history of non-consensual collaboration between artists. Published in collaboration with Ridinghouse and narrated by artist Jake Chapman and art historian Yuval Etgar, the book takes the reader through a wealth of anecdotes and examples from the history of modern art, raising questions around the nature of artistic authorship, standards of collegial etiquette, plagiarism and ownership.

Luxembourg + Co. presents curated, museum-quality exhibitions of works by modern masters and contemporary artists in its spaces in New York and London. Since its opening, the gallery has presented a number of critically acclaimed exhibitions, ranging from individual presentations of artists such as Paul Cezanne, René Magritte, Alberto Burri, Richard Prince and Derrick Adams to thematic survey exhibitions such as Grisaille, Unpainted Paintings, The Shaped Canvas, Revisited and The Ends of Collage. 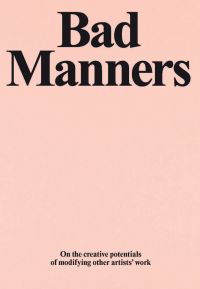