The Ben Uri Research Unit (BURU), in partnership with The Gustav Metzger Foundation, is delighted to announce Becoming Gustav Metzger: Uncovering the Early Years (1945-59). This is the first museum exhibition to examine the little-known formative years of refugee artist and activist Gustav Metzger (Nuremberg, Germany 1926 – London, England 2017). The sixth in BURU’s survey exhibitions highlighting the important contribution of Jewish and immigrant artists to British visual culture since 1900, the exhibition showcases some 40 rarely seen drawings and paintings from this crucial early period – the majority never previously exhibited – together with related archival material. Highlights include Metzger’s Portrait of Frank Auerbach (c. 1952) and the large expressionist oils The Dissolution of the City (1946) and Eroica, Funeral March (1946), as well as early abstract works on board and cardboard, and a kodak box. Together they chart Metzger’s artistic journey from figuration to abstraction prior to the development of his later radical auto-destructive practice. 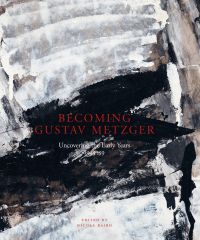