“There is a specific point above ground where you can no longer hear the people below you, and cannot touch the birds above you. That complete isolation sharpens my senses.” Photographer Jeroen Hofman (b. 1976) always works from a crane, some 20 metres above ground. He developed this way of working in order to visualise his fascination with the layers in landscapes. His work shows not only the banks of a river, but also how the entire riverbed meanders through the landscape, thus literally transcending what the human eye normally sees. This way of working results in photographs in which foreground and background merge, like modern dioramas. Over the past few years Hofman has travelled repeatedly to the Frisian Islands in the northern Netherlands, erecting his crane in all kinds of weather. In Island Fotomuseum Den Haag will be showing Hofman’s new work on this unique part of the Netherlands for the first time.

Hofman is fascinated by urban dynamics. His new work, Island, is therefore a major new departure for him, but it is a well-considered choice, as he also regards the constant stimulation of the city as a trap for the soul. When he went to Texel to photograph some of the precious places from a loved one’s childhood, he was struck by all that the island has to offer. A calmness came over him that he had never experienced before. “I was overwhelmed by the sudden emptiness and calm. The fields of sheep, the expansive dune landscapes beautifully shaped by the tides. The rapidly changing weather. Spectacular clouds scudding across the sun, painting the landscape. Showers, gusts of wind and the smell of pine trees wafting on the salty sea air. Peace”, he writes in the book published by Hannibal to accompany the exhibition.
Love letter to the landscape
He soon conceived a plan to photograph all five Frisian Islands, in his own unique way. Like the paintings of Dutch old masters, Island is a love letter to the landscape, rather than a tourist brochure. As he took the photographs, Hofman’s work grew increasingly abstract. The landscapes came to consist more and more of flat planes, shapes and colours, with the horizon as a fixed feature. He thus managed to capture the broad flatness of the Dutch landscape in an impressive way, in a collection that also features the occasional festival, hot day at the beach or dense woodland. The photographs will be shown in large format at Fotomuseum Den Haag so that visitors can experience their full impact. From a distance, it is mainly the play of lines that one notices, but as one comes closer the details tell another story.
More abstract form of photography
Island gave Hofman more freedom in his work, as he did not need to wait for a particular event, or a busy day in a park, for example – subjects he had photographed in earlier work. He also explored a more abstract form of photography, the effect of the emptiness of the landscape on his mood. Each photograph was planned. Hofman often makes reference to the past, and his work often includes a nod to other artists. Yet nothing is staged. Standing up there on the crane, he patiently waits for the perfect photograph. Taking the time to create an image allows everything to come together in a single unique moment. “My motivation is to convey to other people the beauty of all the things I see.”
About Jeroen Hofman
Jeroen Hofman (b. 1976, NL) studied photography at the Royal Academy of Art in The Hague. He experienced his big breakthrough with Playground (2011), a series in which he photographed emergency response training facilities in his now characteristic manner. Inspired by the work of Hans van der Meer, Edward Burtynsky, Gregory Crewdson and others, he began taking photographs from a high vantage point. Gradually, the role of the landscape became more important in his work. In Park (2018) Hofman documented communal spaces and how we share them. As well as producing autonomous work, Hofman also makes portraits. He has won several awards and prizes, including the Silver Camera twice: once for Playground and, in 2014, for a portrait of Hans van Manen. 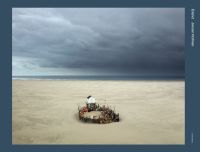