Fernand Léger and the rooftops of Paris

The exhibition Fernand Léger and the rooftops of Paris is the ideal opportunity to discover a key moment in the oeuvre of the French cubist Fernand Léger. It also features a premiere: the discovery of a hidden painting.

When Fernand Léger (1881-1955) paints the series Fumées sur les toits in 1911-1912, he finds himself at a turning point in his career. From 1908 he makes a radical departure from the style of his earlier works, initially heavily inspired by Paul Cézanne, in search of new artistic possibilities. The view from his studio over the roofs of Paris, with its chimneys and plumes of smoke, inspires Léger to experiment with form and colour, working from relatively realistic and monochrome towards increasingly abstract and colourful. This search ultimately results in cubist works such as Contrastes de formes (1913-1914), which he makes on the eve of the First World War. The painting La partie de cartes (1917), which Helene Kröller-Müller acquires for her collection and that constitutes a high point in Léger’s oeuvre, would also have been unimaginable without the Fumées sur les toits.

The centrepiece of the exhibition is a newly discovered painting from this series. The painting appears on the reverse of Léger’s Le quatorze juillet, which was acquired by the Triton Collection Foundation in 1999. The Fumées sur les toits painting was revealed during recent conservation work.

Léger and the cubists in Paris

On the basis of paintings and drawings, Fernand Léger and the rooftops of Paris shows Léger’s development, with the painting Fumées sur les toits from the Triton Collection Foundation at its centre. The painting is on public display for the first time. The broader context is formed by the works of the two groups of cubists in Paris: the group around Pablo Picasso and Georges Braque that exhibited mainly in the gallery of Daniel-Henry Kahnweiler, and the group around Léger, which exhibited at the major Salons and also included Robert Delaunay, Jean Metzinger and Henri Le Fauconnier.

The exhibition Fernand Léger and the rooftops of Paris is produced in collaboration with the Triton Collection Foundation. The guest curator for the exhibition is Sjraar van Heugten, former Head of Collections at the Van Gogh Museum and currently an independent art historian. 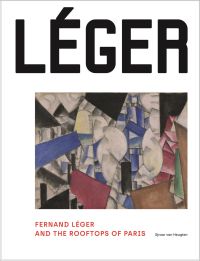 Fernand Léger and the Rooftops of Paris