A rich cultural programme will be available to the public, including an Impressionism curatorial talk, dance performances and much more.

Abu Dhabi, 12 October 2022: Louvre Abu Dhabi is pleased to announce that his H.E. Mohamed Khalifa Al Mubarak, Chairman of the Department of Culture and Tourism – Abu Dhabi, has inaugurated the museum’s first international exhibition of the season, Impressionism: Pathways to Modernity, as part of the museum’s fifth anniversary celebrations. Open to the public from today, 12 October, until 5 February 2023, it is the most comprehensive Impressionist showcase ever held in the region and one of the three major exhibitions to be held as part of the museum’s 2022-2023 cultural season. Organised in partnership with Musée d’Orsay and France Muséums, Impressionism will display more than 150 artworks highlighting artists’ reactions to social and economic upheavals from the mid-1850s to the end of the 19th century.

Manuel Rabaté, Director of Louvre Abu Dhabi, said: “Impressionism: Pathways to Modernity is a momentous and thought-provoking exhibition of unprecedented scale in the Gulf region, demonstrating remarkable tenacity and ambition as we inch closer to our fifth anniversary. This exhibition exemplifies the museum’s ongoing desire to continually re-think art history, open minds to new perspectives and promote cultural connection and dialogue. A special thanks goes to Musée d’Orsay, France Muséums and our esteemed French partners, who have helped in bringing this exhibition to fruition.”

Christophe Leribault, President of the public establishment of the Musée d’Orsay and the Musée de l’Orangerie – Valéry Giscard d’Estaing, said: “The Musée d’Orsay is very proud to participate in this exhibition with an exceptional set of loans and thus to respond to the ambition of dialogue and openness of Louvre Abu Dhabi. I am delighted that the public is discovering the modernity of this second half of the 19th century wonderfully told by artists such as Manet, Degas, Caillebotte, and Monet. I sincerely thank the curators who have made this incredible project possible, all the teams at our museum, France Museums and Louvre Abu Dhabi.”

The exhibition features more than 100 paintings, 40 drawings and prints, 20 photographs and five dresses from the era, as well as a contemporary video installation by the French renowned artist Ange Leccia. Highlights include a selection of artworks from Louvre Abu Dhabi’s collection including two paintings by Edouard Manet, The Bohemian, 1861-1862, and Still Life with Bag and Garlic, 1861-1862, Alfred Sisley’s The Road to Verrières, 1872, and Gustave Caillebotte’s The Bezique Game, 1881. Highlights from Musée d’Orsay collection include The Balcony by Edouard Manet, 1898-1869, The Magpie by Claude Monet, 1868-1869, The Floor Scrapers, 1875 by Gustave Caillebotte, The Racecourse. Amateur Jockeys Near a Car by Edgar Degas, 1876-1887, and Woman with a Coffee Pot by Paul Cézanne, 1890-1895. The Cup of Chocolate by Pierre-Auguste Renoir, 1877 – 1878, a new acquisition by Louvre Abu Dhabi, will be unveiled for the first time in this exhibition.

The exhibition is mainly drawn from the Musée d’Orsay Impressionist collections, which are the finest in the world. Musée d’Orsay is lending these exceptional pieces for the first time in the region to celebrate the 5th anniversary of Louvre Abu Dhabi.

Impressionism: Pathways to Modernity is curated by Sylvie Patry, Chief Curator and Deputy Director for Collections and Curatorial Affairs at Musée d’Orsay, and Stéphane Guégan, Scientific Advisor to the President, Musée d’Orsay and Musée de l’Orangerie, with the support of Dr. Souraya Noujaim, Director of Scientific, Curatorial and Collections Management at Louvre Abu Dhabi.

Dr. Souraya Noujaim, Scientific, Curatorial and Collections Management Director at Louvre Abu Dhabi, said: “Impressionism: Pathways to Modernity features paintings of Paul Cézanne, Edgar Degas, Claude Monet, Berthe Morisot, Camille Pissarro and Alfred Sisley, as they enter into dialogue with more classical practices, offering a new and daring vision of painting where the interpretation of reality was no longer stable and monolithic, but subject to a range of interpretations and perceptions. By capturing fleeting moments in time and space, the exhibition conjures up a unique moment in history, spanning a period of time from the mid-1850s to the very end of the 19th century, during which the industrial revolution radically reshaped the world and the art.”

A rich cultural programme will be available to the public, including a curatorial talk on Impressionism, film screenings under the iconic Louvre Abu Dhabi dome, and a contemporary dance performance and masterclass by Sima Dance, inspired by the exhibition. Visitors can also enjoy the second edition of “Living Art”, bringing ballerinas from Edgar Degas’ painting Ballet Rehearsal on Stage to life along with a piano recital inspired by the Impressionist movement.

A range of educational activities will be available for adults, schools, families and youth, including an Express Tour of the exhibition; an oil painting masterclass led by Emirati artist Saggaf Alhashmi; Make and Play activities where children can learn different kinds of painting techniques inspired by nature and the outdoors; and a Young Visitor’s Guide, offering young ones the opportunity to learn about the pioneering Impressionist artists. 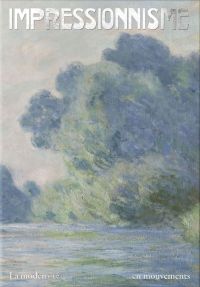