The first major review of the work of British artist Eileen Cooper OBE RA from her 40 year career.

“Parallel Lines” is the first major review of the work of British artist Eileen Cooper OBE RA. It is curated by Kathleen Soriano, independent art curator, writer, and television broadcaster.

Eileen Cooper first came to public attention in the 1980s as a painter and printmaker. She also creates drawings, collages, ceramics, and sculpture. Cooper uses the “figurative” artistic style. This is a modern art technique that shows the human figure in an altered or distorted way. “Parallel Lines” looks at the inspiration for her artworks and explores the impact of museum art collections on artists today.

The exhibition features Cooper’s key works including Creepy Crawly (1987), an example of her early figurative work. This piece is displayed alongside the Museum’s Red Woman (1912) by the German Expressionist artist Franz Marc. Cooper was particularly attracted to this painting when she taught at Leicester Polytechnic. New works will also be on display, including Mother’s Day (2021), which was inspired by her new granddaughter.

Cooper was the first female Keeper at the Royal of Academy of Arts. She was responsible for improving the international reputation of the Royal Academy schools. At St Martin’s School of Art Cooper taught Peter Doig. His painting Concrete Cabin (1991-2) is displayed alongside Cooper’s Going Ape (1982). Also on public display for the first time are three portraits by Cooper of her RA students.

A catalogue by curator, Kathleen Soriano, supports the exhibition. It features essays by Soriano, and Linsey Young, Curator of Contemporary British Art at Tate Britain. The catalogue has been generously sponsored by Huxley Parlour, Eileen Cooper’s gallery. 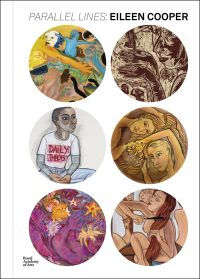