PIER PAOLO PASOLINI. EVERYTHING IS HOLY

On the occasion of the centenary of the birth of Pier Paolo Pasolini (Bologna, 5 March 1922 – Rome, 2 November 1975), the Palaexpo Special Company of Rome, the National Galleries of Ancient Art and the MAXXI National Museum of XXI Century Arts celebrate the figure of the director, writer and artist, in their respective museums, with a coordinated and shared exhibition project, divided into three distinct exhibitions entitled: Pier Paolo Pasolini. EVERYTHING IS HOLY . The project conceived and curated collectively by Michele Di Monte , Giulia Ferracci , Giuseppe Garrera , Flaminia Gennari Santori , Hou Hanru , Cesare Pietroiusti , Bartolomeo Pietromarchi, Clara Tosi Pamphili , has as its starting point the theme of corporeality and intertwines disciplines, media, original works and archival documents according to three autonomous guidelines, specific for each location, but conceived to be integrated in order to solicit unpublished reflections on Pasolini’s production , on the cultural influence it has exercised and still has on the gaze of those who observe it since the 21st century.
The common title, Pier Paolo Pasolini. EVERYTHING IS HOLY, is inspired by the sentence pronounced by the wise Chirone in the film Medea (1969), to evoke the mysterious sacredness of the world: the archaic, religious, underclass world, a world without classes and ideological affiliations, in opposition to that of modernity ordered according to rational, secular, bourgeois principles.

The exhibition at the Palazzo delle Esposizioni, from 19 October 2022 to 26 February 2023, Pier Paolo Pasolini. EVERYTHING IS HOLY. The poetic body – edited by Giuseppe Garrera , Cesare Pietroiusti , Clara Tosi Pamphili and Olivier Saillard(co-curator for the section dedicated to costumes) – presents exclusively original materials: a careful selection of over 700 pieces that compose a “corporeal” and unpublished portrait of the great Italian intellectual: vintage photographs, period newspapers, premieres editions of books, magazines in which interviews, articles, speeches, and then typed, mimeographed, films, records, tapes, and over 100 costumes and stage costumes appeared for the first time. An exhibition that, in all its parts, speaks of love for things and bodies, in the name of the sanctity of reality.

Even the articles in magazines and newspapers of the time are exhibited in the exciting integrity of their first appearance and “incarnation” in the world. Therefore, the source in its material reality is not only indicated but also exhibited for each quotation: for example, the complete copy of the “Corriere della sera” of January 19, 1975 where Pasolini’s article “against abortion” appeared. , an ephemeral object but with a content and a history that are still dynamite.
In this investigation, together with newspapers and magazines, the book as an object becomes a powerful incarnation of the word and takes on perhaps the most important part of the corpus .Pasolinian: it starts from the adolescent dream, to print one’s own poetry booklet (at one’s own expense, artisanal, naive, wonderful) up to the great publications, to the collections that mark the arrival of notoriety. For Pasolini the passion of publishing books is linked to the desire to spread thoughts, visions and torments, in a continuous dialogue with people, with the public, with people; a dialogue made, between 1960 and 1975, of columns, interviews, continuous interventions in newspapers and weeklies.
The weekly columns on “Vie Nuove” (“Dialogues with Pasolini”) and on “Tempo” (first “Il chaos” and then “Readings”) up to the collaboration with the “Corriere della sera”, clearly trace a Pasolini “corsaro “Always: all his journalistic production has the value of an extraordinary Zibaldone of thoughts and struggle: it is in dialogue, in the encounter with others that the most poetic experience of bodies takes place.

Through Pasolini’s work the miracle of the diversity of faces and of an anarchist thinking appears; the sacredness of the feminine, of the negritudes, of the South seen as a horizon of otherness and salvation. It is the savage, barbaric and extreme force of Pasolini’s speech, and the ferocious derision suffered for its diversity; the love or yearning for non-domesticated languages, for dialects and speeches, for the progressive disappearance, caused by television standardization, of the voices and songs of the people; for the clothes that have disappeared from the earth and for the centrality of poverty as a real human dimension in the face of the alienated unreality of consumerism.

The exhibition is divided into seven thematic sections: Face – People are saints ;Ridicule – The language of the fathers ; Feminine – The sacred that is taken from us ; Dresses – The costumes of the body ; Voices – Of people and poet ; Partitella – The real Italy, out of the darkness ; Rome – The city on the street and Rome – Accomplice Sodoma .
At the center of the exhibition, the circular space of the Rotonda of Palazzo delle Esposizioni is transformed into a large reading room where there are numerous editions of books on and by Pier Paolo Pasolini freely accessible to the public.

Among the special projects, a vinyl produced by Bomba Dischi is on display, in collaboration with Gucci, sponsor of the project, with Ariete, Franco126, CLAVDIO, Giorgio Poi, POP X & Giacomo Laser who pay homage to the “songs” written and loved by Pasolini, and which will be listened to for the entire duration of the exposure. Download the Exhibition Brochure The exhibition catalog is published by 5 CONTINENTS in co-edition with Palazzo delle Esposizioni 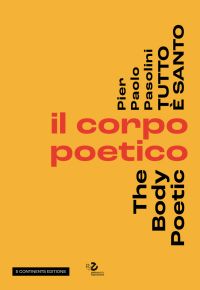 Pier Pasolini Everything is Sacred