Pierre-Louis Faloci. An ecology of the gaze.

Designed as part of the National Grand Prix for Architecture, of which Pierre-Louis Faloci is the 2018 winner, the exhibition is a carte blanche given to the architect to explain his approach and retrace his career.

A figure apart, away from fashions, Pierre-Louis Faloci articulates his practice around the notion of “global landscape” which he has long developed in his teaching and which constitutes the problematic base on which his convictions of architect.

His vocation as a builder was born from a “visual obstruction”: the erection of a building in front of the family home which erased, when he was 13, the view of his childhood on the city of Nice, on the sea, the big rock, the hills, the bay, the Pre-Alps… This “optical shock” will accompany his theoretical and plastic experiments around the “architecture/landscape” relationships that he will approach throughout his career as a “whole malleable” to structure its perception as finely as possible. He will be interested, in particular, in the culture of the gaze in the history of art, photography and above all in a certain form of cinema.

His design work has been structured for several years around key notions that crystallize his architectural and urban planning concerns and his political concerns about the contemporary era. These themes accompany the selection of projects presented in the exhibition as well as the reference universes of the architect and their eminent heroes: Georges Méliès and his pragmatic studio, Le Nôtre and his ingenious optical devices, Hubert Damisch for his theoretical work and his book The Origin of Perspective, Gilles Deleuze for the question of the time image and the movement image or even filmmakers like Michelangelo Antonioni, Andreï Tarkovski, Abbas Kiarostami, Yasujirō Ozu, Akira Kurosawa, Roberto Rossellini, Jean-Luc Godard , etc.

The exhibition presents in a scenography designed by Pierre-Louis Faloci, fifteen major achievements, a journey combining architecture and cinema, from the wine farm of Cacela Velha, in the south of Portugal, to the School of Architecture of Toulouse, from the Archaeological Center of Mont-Beuvray to the Museum of Modern Art in Céret, via projects such as the Historical Center of the Battle of Valmy, the Learning Center in Dunkirk and the Archaeological Museum of Mariana in Haute-Corse. 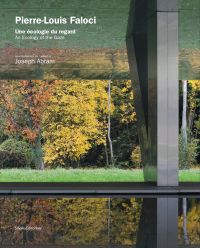