Martin Disler (1949–1996) is coming to the Kirchner Museum Davos. A Swiss painter, draughtsman, sculptor and poet, Disler gained international recognition starting in the 1980s and became one of the protagonists of new expressive painting. In his work he reflects on the fragmentation and vulnerability of human existence. Along with his generation, the Junge Wilde in Germany and the Transavanguardia in Italy, he thus took a counter-position to conceptual art.

In addition to numerous previously unknown pieces from his estate, the exhibition presents works from private and public Swiss collections. Focusing on the last ten years of Disler’s career, it creates a fascinating dialogue between his work and that of Ernst Ludwig Kirchner. Disler’s late work explores connections between early twentieth-century Expressionism and the new expressivity of postmodernism.

Parallels can be found in the wide variety of formats and genres, ranging from the intimate sketch to the monumental painting and from representations of the human figure to abstraction. Major themes are the importance of the body and its role in the creative act, body language, dance, movement, gestures, expression, abstraction and figuration.

Along with painting, printmaking and drawing, sculpture plays a central role. The exhibition features sculptures by Ernst Ludwig Kirchner from different stylistic periods which are juxtaposed with a selection of Martin Disler’s paintings and monotypes as well as human-sized bronze sculptures from his series “Shedding of Skin and Dance”, products of an intense creative process in 1990–91.

The expressive bronze figures are materialisations of his physical thinking. They represent an ecstatic dance of transformation – themes which can be found in the works of Ernst Ludwig Kirchner as well, notably his drawings and sketches, and may be understood as a “theatre of survival”.

Disler’s late paintings are sophisticated works; they owe their extraordinary power and impact not only to their size but their particular painting technique. The artist used his hands to feel and mould his paintings in a process of continuous compression. Not unlike working on a sculpture, he would apply paint by brush and hand, only to remove it again with knife and fingernails.

In the 1980s, Disler became preoccupied with the medium of the monotype and experimented with various printing processes and techniques, using very large formats for his prints as well. He would take on the particular challenges of the technique and push the limits of matter. The terracotta sculptures include a series of flat hanging masks or skulls alongside three-dimensional objects with multiple heads. They are evocative of both human and animal heads growing intertwined from the same ground.

Writing became very important to Martin Disler in his final years: several novels and stories remain unpublished, as they could not withstand his own criticism. He included texts in more than a dozen artist’s books. His extraordinarily powerful use of language, which would accompany his artistic work with painful poignancy, is evident in the novel Bilder vom Maler (Pictures of the Painter) and numerous poems. In these, Martin Disler describes artistic existence in a language reflecting exhaustion and excess, much like can be found in some letters and writings by Kirchner. 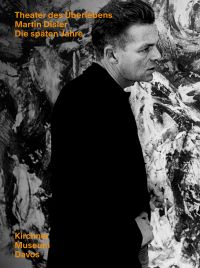