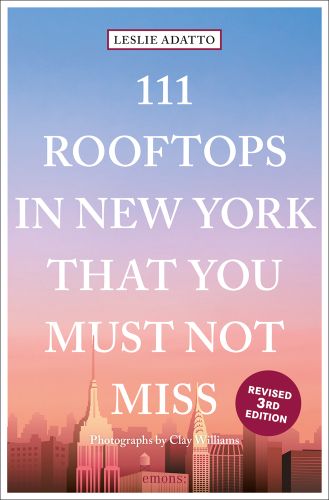 New York City is world-renowned for its skyline, and perched atop its lofty heights is a feast of breathtaking rooftop destinations for every taste and imagination. 111 Rooftops in New York That You Must Not Miss
is the ultimate guide to an urban treasure trove of gems in the sky. It will guide you throughout the city’s five boroughs to rooftop bars and restaurants, urban farms, sports, cultural events, classes, green roofs, parks, and, of course, spectacular views from above.

Rooftops are the final frontier for urban explorers. This complete guide showcases a dazzling array of surprising rooftop escapes in Manhattan, Brooklyn, Queens, Staten Island and the Bronx. Once associated with privilege and exclusivity, the city’s highest points are now accessible to anyone with a sense of adventure.

111 Rooftops in New York That You Must Not Miss
is packed with sumptuous photos and brimming with handy insights into the nuance, atmosphere, and clientele of each place, as well as practical information, from hours of operation to the closest subway stop.

About the Author
Leslie Adatto has been seeking out New York City rooftops since relocating to Manhattan in 2010. She blogs about New York City rooftops (lookingupwithleslie.com) and organises two active Meetup groups, The New York Roof Deck and Roof Gardening Meetup Group and Rooftop Drinkers NYC. Leslie earned a BA in English from UCLA, is a former high school teacher and runs a bicoastal business. Leslie lives, bikes and cooks in the West Village. Born in Queens, raised in Brooklyn, Clay Williams is a lifelong New Yorker who photographs food, drinks and events for The New York Times, Edible Communities magazines, and the James Beard Foundation. With his camera in tow, Clay has hung on to the back of food trucks in Paris, trudged through farms in Argentina, and squeezed into tiny kitchens with world famous chefs. When he's not documenting the food system, he's at home, cooking dishes inspired by what he photographs every day. Clay lives in Sunset Park, Brooklyn, with his wife Tammi, a fellow New York native.
Specifications