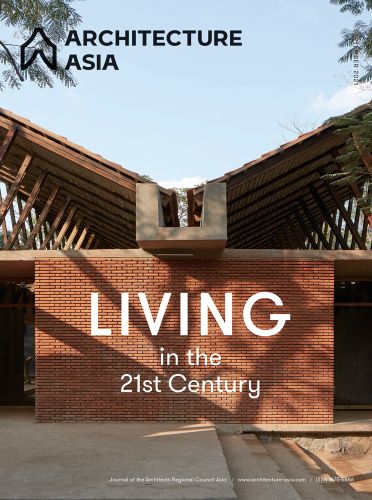 Architecture Asia, as the official journal of the Architects Regional Council Asia, aims to provide a forum not only for presenting Asian phenomena and their characteristics to the world but also for understanding diversity and multiculturalism within Asia from a global perspective. In the 21st century, Asia has been developed fast in the wave of globalisation, and the living and urban environment are changing rapidly along with the economic development. In this process, many Asian cities are carrying out large-scale urban infrastructure construction in the process of rapid urbanisation, and building a large number of iconic buildings that represent the characteristics of the country or city. This issue focuses on Living in the 21st Century, through three perspectives: the transformation of spatial functions, the contradiction between urban development and individual dwelling, and architecture in the age of self-media.

Professor WU Jiang is a full professor at Tongji University College of Architecture and Urban Planning. He was the former Deputy Director of Shanghai Urban Planning Administration Bureau, and the former Executive Vice President of Tongji University. He was elected the member of L’Académie d’Architecture de France in 2015. Since 2019, he has been serving as the Vice President of Architects Regional Council (ARCASIA). He is the Board Chairman of the Global University Partnership on Environment and Sustainability (GUPES), as well as the member of the UIA Education Commission (EDUCOM). He is the Vice President of Urban Planning Society of China (UPSC), serving as a standing council member of the Architectural Society of China (ASC), and the Director of Institute of Architectural Education, Architectural Society of China (IAE-ASC), as well as the Chairman of Asian City Forum. He has been invited to world well-known universities and research institutes to deliver keynote speeches, including Harvard, Yale and Princeton. He is also the founder of several joint international design studios with top world institutes such as Princeton, HKU, ETH, Yale, UIUC and TU Berlin. He was the juror of final review of Dubai Awards hosted by UN HABITAT. He was the curator of 2002 Shanghai Biennale Urban Construction, as well as the founder and chief curator of the 1st Shanghai Urban Space Art Season (SUSAS 2015). As a devoted architecture scholar, he has published a dozen of important books on architectural history, urban planning, as well as urban regeneration and urban governance.