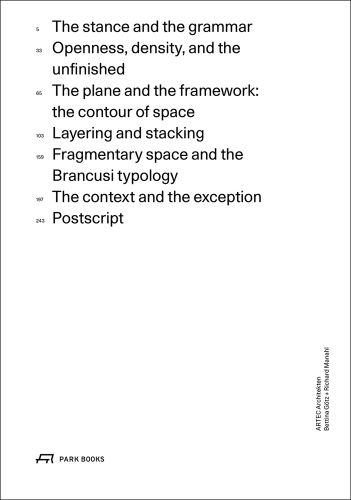 In their concepts, buildings and designs submitted for competitions, as well as in the theory of their teaching, Bettina Götz and Richard Manahl investigate the relationship between architecture and the creation of high-quality urban environments. They give special attention to typologies, structures and social aspects. Strong building concepts and their interplay with the urban context and the inhabitants’ individual spatial demands are also of great importance in the work of their firm ARTEC Architekten. Ever since founding the firm in 1987, Götz and Manahl have contributed significantly to architectural discourse in Austria and abroad. Housing, a typology fundamentally shaping the city, is the core of their work.

This manifesto-type book introduces the reader to the thinking and visions of ARTEC Architekten. It features a vast selection of projects, built and unrealised, through images and floor plans and sections, alongside six programmatic essays by Götz and Manahl. The book’s design demonstrates visually what the texts elaborate upon in theory: their attitude to architecture’s core topics, their design methods and their ongoing engagement with the historical and current aspects of habitation.

About the Author
Bettina Götz graduated from Technische Universität Graz and co-founded Vienna-based ARTECT Architekten in 1987. She also teaches as a Professor of Design and Construction at Berlin University of the Arts. Richard Manahl graduated from Technische Universität Graz and is also co-founder of ARTECT Architekten, and has been teaching as visiting professor at Università IUAV in Venice 2015 and at ENSA Paris - Val de Seine in 2017.
Specifications