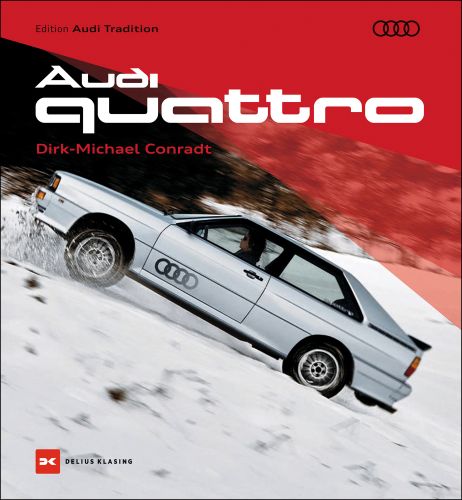 At Audi, they are fond of recalling how a pre-production quattro left all rear-wheel-drive sedans behind on an incline in wintry Austria – with summer tires! In fact, the well-known Audi slogan “Vorsprung durch Technik” (Progress through Technology) has seldom been put into practice as tangibly as with the presentation of permanent all-wheel drive in the Audi quattro, which established this drive variant as one of the first in production vehicle manufacturing. And it was not only on snow-covered mountain passes that the four driven wheels played out their advantages: They were safer and, above all, faster on all kinds of surfaces.

There are numerous special features that make this brand-defining sports coupe stand out: the five-cylinder in-line engine made for a husky voice, the digital displays installed in the interior from 1982 onward gave it a futuristic look, and the angular body design with its distinctive twin headlights had a high recognition factor. Anyone who drove a quattro stood out. This successful package was crowned by the successes of the sports version: Walter Röhrl’s victory in the 1984 Monte Carlo Rally and the record-breaking drive in the 1987 Pikes Peak Hillclimb cemented the nimbus of the sporty all-purpose weapon.

﻿Forty years after its unveiling at the 1980 Geneva Motor Show, the Audi quattro now receives its well-deserved tribute in a comprehensive monograph written by brand connoisseur, Audi driver, and noted automotive journalist Dirk-Michael Conradt. This 400 page, heavily illustrated book offers a complete chronology of the Urquattro from prototype to final model, and includes technical data and production figures. The illustrations include numerous previously unpublished images from the Audi factory archive.