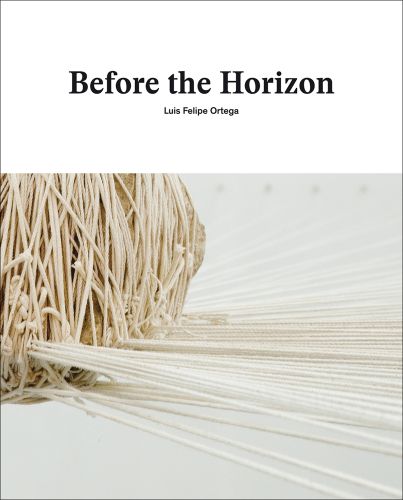 Before the Horizon: Luis Felipe Ortega

Various thinkers in the arts and humanities, who have dialogued with Luis Felipe Ortega and written about his work over the course of his career, have contributed to the creation of this book.
It is conceived as a continuum; there is no table of contents at the beginning and the chronological listing of the images and texts it contains are at the end of the volume, where they function as index.

Alexis Salas and Sergio González Rodríguez have prepared texts specifically for this work, in addition to the ammassed contributions from other renowned voices in the art and cultural field. Salas reviews Luis Felipe Ortega’s career, in dialogue with the content of this book, while González focuses on one piece: “Truth Lives at the End if the Tunnel”. Salas’ overview works in conjunction with González’s detailed analysis, forming a template for how to approach this intriguing artist.

Text in English and Spanish.

About the Author
Alexis Salas, a doctoral candidate in art history at the University of Texas at Austin, received her B.A. in history of art and Spanish from Amherst College and her M.A. in art history from the University of Chicago. Salas also studied at Universitat der Kunste Berlin and at the California Institute of the Arts prior to working toward her Ph.D. She studies modern and contemporary art, visual culture, and design with a particular interest in Latin America. Salas has been a recipient of the Jacob Javits Fellowship, Fulbright Fellowship, the DAAD Fellowship and several awards to conduct research, teach, and lecture in Latin America, Europe and North America. Her research interests concern socially engaged art practices and the social role of the artist, particularly in relation to cultural institutions. Sergio Gonzalez Rodriguez (b. January 26, 1950) is a Mexican journalist and writer who is best known for his writings on the femicides in Ciudad Juarez in the 1990s to 2000s. The major publication from this work is Huesos en el Desierto (Bones in the Desert) which was published in 2002. Gonzalez Rodriguez has also written novels, essays and screenplays for documentaries. His work has been recognized with several awards in Mexico and Spain.
Specifications