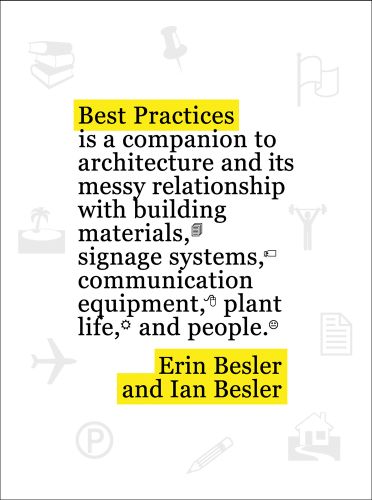 In visually cataloging the endearing and enigmatic ways in which the built environment takes shape, Best Practices proposes a new way of thinking about neighbourhoods, housing developments, streetscapes, and storefronts, not so much as places defined by building codes, dimensions, or geographic features, but as assemblages of ad hoc interventions and incidental ephemera.

Drawing on the history of architecture, media theory, cultural anthropology, and urban studies, Best Practices pairs photographic documentation with extensive captions and citations to define a territory within the margins between the sanctioned and unsanctioned, the regulated and unregulated, the tasteful and tacky, the novel and the nonsense. While not necessarily in opposition of those mechanisms, Best Practices asserts that interest, knowledge, and meaning are more often generated on the lines that divide such categories. This book advocates for a more thorough consideration of the unauthorised remodels, slap-dash handiwork, haphazard paint jobs, half-hearted do-it-yourself projects, cracked facades, contradictions, compromises, and coincidences.

About the Author
Erin Besler is an Assistant Professor of Architecture at Princeton University and co-founder of Besler & Sons. Erin's work is characterised by a particular interest in construction technologies, social media, and other platforms for producing and sharing content that rely more on ubiquity than expertise.


Ian Besler is a designer, educator, and writer whose work is situated at the edges between interfaces, media, software, and cities. Ian's work is especially interested in the defaults, incidentals, and workarounds of visual communication and digital interactions. He is a Visiting Assistant Professor at Pratt Institute and a co-founder of Besler & Sons.

Jonathan Jae-an Crisman is an artist and urban scholar whose work focuses on the intersections between culture, place, and politics. He is currently an assistant professor of public & applied humanities at the University of Arizona.

Fiona Connor (born in New Zealand) is an artist based in Los Angeles. She has made solo exhibitions at Secession, Vienna; SculptureCenter, New York; MAK Center for Art and Architecture, Los Angeles; Govett-Brewster Art Gallery, New Plymouth; Monash University Museum of Art, Melbourne; Hammer Museum, Los Angeles among others. Connor received an MFA from the California Institute of the Arts in 2011.

Wendy Gilmartin is a licensed architect and writer based in Los Angeles and the Mojave Desert. She holds an MArch degree from Rice University and is an educator at California Polytechnic State University, Pomona. Prior to becoming an architect, Wendy was a music critic at LAWeekly for ten years.

Courtney Coffman, editor, is manager of lectures and publications at Princeton University's School of Architecture. She has served as a content and copy editor for various architectural publications and monographs. Her own writings explore the visual culture of contemporary architecture and design.

Christina Moushoul, associate editor, obtained her undergraduate degree from UCLA and is currently an MArch candidate at the Princeton University School of Architecture, where she is an editor of the journal Pidgin.