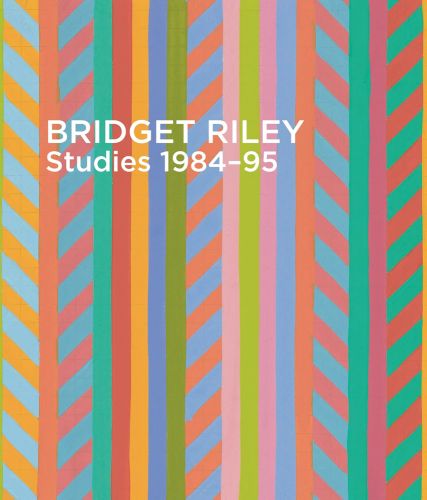 During the mid-1980s, Riley introduced a new pictorial device, the rhomboid, to her then predominantly vertical stripes, developing her exploration of interplaying tones of green, yellow and orange. This allowed the artist to construct new visual relationships between divergent colours and forms, creating what she terms a ‘harmony of contrasts’ that animates the entire visual field.

Tracking a transitional period in Riley’s career, the works on paper in this volume – studies produced between 1984 and 1995 – shift from a focus on the vertical stripe to increasingly complex diagonal compositions. Illustrated in full colour, the works are accompanied by a historic interview with the artist by Robert Kudielka and a text by Riley’s archivists Natalia Naish and Alexandra Tommasini, situating these studies in relation to major paintings produced during this period.

Natalia Naish has worked as an Archivist for Bridget Riley since 2012 and is a writer.

Alexandra Tommasini has been an Archivist for Bridget Riley since 2012, having previously worked at museums in the UK, USA and Italy.

Robert Kudielka is Professor Emeritus of Aesthetics and Philosophy of Art at the Hochschule der Künste in Berlin and a curator. He is a noted scholar of the works of Bridget Riley and has published numerous books on, and with, the artist.

Bridget Riley CH CBE (b.1931 London) was celebrated early in her career as a pioneer of Op art, and her early works in the early 1960s featured highly geometric black-and-white patterns. She has worked with colour since the mid-1960s. Though her work is thoroughly abstract, Riley was hugely influenced by the work of the Pointillist artist Georges Seurat. This is often visible in the colour palette of her works, though her palettes often took inspiration from her travels (eg to Egypt, Italy). She has also written about artists (Old Masters and modern/contemporary artists alike) and curated exhibitions at London's Hayward Gallery and National Gallery. Her work is widely collected by the world's greatest museums (eg MoMA, Tate, MFA Boston, Museum Boijmans Van Beuningen) and others across the UK and USA, as well as the UK's Government Art Collection. Now 90, she is still working as a painter and printmaker.