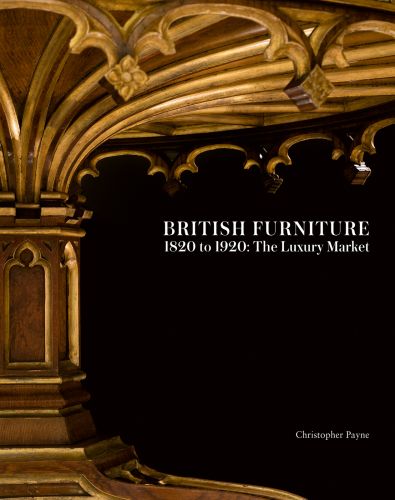 British Furniture 1820 to 1920 is the first book on the subject for several decades and the only book ever published to span the century from 1820 through to 1920. It creates a continuum to underline the importance of the late Recency style favoured by George IV, moving through to the first two decades of the 20th century, with a host of ever-changing styles and fashions. Payne illustrates the importance of the revival styles and copies: a fundamental part of the furniture trade that has often previously been ignored.

Many of the makers’ names are familiar to furniture collectors, such as Gillows, Hollands, Collinson & Lock, Morris & Co. and Maples. However, the importance of others, such as Baldock, Blake, Trollope, Hindley & Wilkinson, Hamptons or Lenygon & Morant – as well as a host of provincial makers – is explained.

British Furniture 1820 to 1920 – The Luxury Market is a landmark publication and arguably the first book to properly assess British furniture design through the whole of the Victorian era. It goes further than any book has attempted before by filling in important research particular for the latter half of the century. It shows that what is often termed simply, and once pejoratively, as ‘Victorian’ is often of an earlier date, commencing in the revered Regency period of the 1820s. Christopher Payne considers each decade, adding important new research and building a huge archive of text and images. The book contains in excess of 1000 colour photographs and also an important compendium of makers names and details.

Christopher Payne, a former director of Sotheby's, is an independent furniture historian and author and who appeared on the BBC Antiques Roadshow for over 30 years.