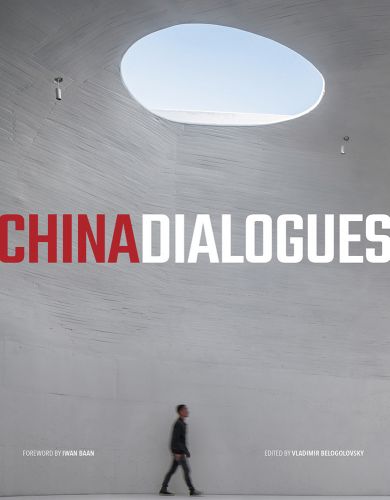 Since the mid-1990s, when China allowed its architects to practice independently from government-run design institutes, a new kind of architecture, distinguished by unique regional characteristics, has emerged. China Dialogues is a rigorously selected collection of insightful interviews that the book’s author Vladimir Belogolovsky has conducted with 21 leading Chinese architects during his extensive travels in China. At the time when so many buildings that are being built around the world are no longer rooted in their place and culture, the leading Chinese architects succeeded collectively in producing unique architectural body of work that could not be confused with any other regional school. The interviews are accompanied by over 120 photographs and drawings of beautifully executed projects built throughout China since early 2000s. China Dialogues opens up the thinking process of the country’s top architects, as they share their ideas, insights, intentions, and visions in unusually revealing and candid ways.

Vladimir Belogolovsky (b. 1970, Odessa, Ukraine) is an American curator, critic, and founder of NYC-based Curatorial Project, a nonprofit focused on curating exhibitions. He has interviewed over 350 architects, has written ten books, curated over 50 exhibitions, and lectured in more than 30 countries.
Kenneth Frampton (b. 1930) is a British-American critic and historian. He is the Ware Professor of Architecture at the Graduate School of Architecture, Planning, and Preservation at Columbia University in New York and is regarded as one of the world's leading architectural historians.

Crisie (Jialin) Yuan is the director of the International Office of Tongji University Press. She received her bachelor’s degree of Chinese Language and Literature in 2008 and is currently pursuing a master’s degree on Teaching Chinese to Speakers of Other Languages at Tongji University. With five years working experience as a journalist/editor in Chinese architectural design magazines and five years working experience as PR in Archi-Union Architects (an avant-guard architectural studio in China), she got fully editing, curating and marketing skills in architectural design field. She has been working as a commissioning editor at Tongji University Press since 2015. And establishing the International Office of Tongji University Press in 2017, her recent works are mainly focusing on promoting the international co-publishing programs, building a multi-platform and exploring more possibilities on culture exchange.

Established in 1984, led by Ministry of Education of the People’s Republic of China, Tongji University Press (TJUP) is the official publishing house of Tongji University, one of China’s leading universities and research institutions. By establishing Urbanism + Architecture (in 2012, TJUP established a high-end professional publishing brand – LUMINOCITY, specialised in urbanism & architecture), Art + Design and Civil Engineering as its brands, Polytechnic and Medicine, Fundamental Disciplines, Humanities, German and European Culture publishing as its major publishing areas. Under the new situation, TJUP is entering an exciting new phase focused on building the international multi-platform.