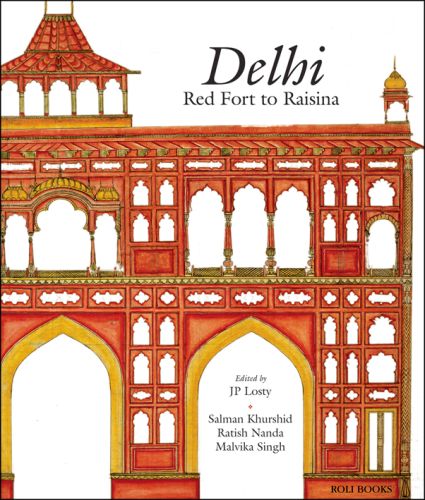 Delhi: Red Fort to Raisina traces the journey of Shahjahan’s new capital of the Mughal Empire, Shahjahanabad built on the banks of river Yamuna in 1638 to New Delhi the new capital of British-ruled India in 1911. From Red Fort to Jama Masjid and from Jahanara Bagh to Hayat Bakhsh Bagh, every palace, mosque, bazaar, and bagh in the Mughal city was planned to perfection. The new city too, designed in the early twentieth century, was a blend of Mughal architecture and modern aesthetics. This book celebrates the centenary with four essays on different aspects of Delhi’s history. A lively portrait of the city and its culture and people, the book documents the transition of the old-world charm of Shahjahanabad to a modern city with a new seat of power built on the Raisina Hill. Contents: Introduction – JP Losty; Delineating Delhi: Images of the Mughal Capital – JP Losty; Life in Shahjahanabad – Salman Khurshid; Architecture of Shahjahanabad – Ratish Nanda; Map of Shahjahanabad, 1846-47; Making of New Delhi – Malvika Singh; Bibliography; Notes; Index. Pramod Kapoor is a collector of historical records and photographs, and a publisher by profession. The photographs for this book were lovingly collected by him over a long period of time from all over the world. Often, the best photographs were found in old trunks lying forgotten in dusty attics or damp basements of the palaces. A keen photographer, he has also compiled and researched photographs for pioneering books like India: Then and Now, Witness to Life and Freedom: Margaret-Bourke White in India, New Delhi: Making of a Capital, and the most recent Delhi: Red Fort to Raisina.

About the Author
JP Losty was formerly Curator-in-charge of the extensive Indian visual collections in the British Library in London. He has published books and papers on many aspects of the painting of India from the 12th to the 19th centuries. The paintings of late Mughal Delhi are central to his interests, and he has recently authored a book on Delhi topographical painting, titled' Delhi 360: Mazhar Ali Khan's View from the Lahore Gate' (Roli Books) and has also contributed to the catalogue of the forthcoming exhibition on Delhi at the Asia Society, New York. Salman Khurshid is an Indian politician belonging to the Indian National Congress, a lawyer, and a writer. He is presently the Cabinet Minister of the Ministry of Law and Justice and Ministry of Minority Affairs, Government of India. He has been deeply involved in writing and acting in plays since his student days in Delhi and Oxford. He is the author of the play 'Sons of Babur', which has been staged with Tom Alter in the lead role, at the Red Fort in Delhi. Ratish Nanda, Conservation Architect, is the Projects Director for the Aga Khan Trust for Culture in India for whom he was earlier responsible for the Humayun's Tomb Garden Conservation and Baghe Babur Restoration, Kabul, Afghanistan. For INTACH, he prepared the inventory of historic buildings for Delhi, published in two volumes as Delhi, the Built Heritage. Malvika Singh is the Publisher of 'Seminar', a monthly journal of ideas and alternatives. She is a weekly columnist with 'The Telegraph', and is the author of 'New Delhi: Making of a Capital' (Roli Books); 'Delhi, India in one city'; 'Bhutan: Through the Lens of a King' (Roli Books); 'India by Snowdon', where she wrote the text. She has edited F'reeing the Spirit: Iconic Women of India'; and a series on six Indian cities - Delhi, Chennai, Kolkata, Mumbai, Hyderabad, and Lucknow.
Specifications