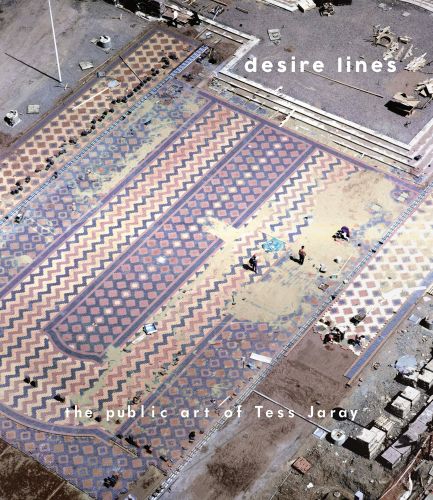 The Public Art of Tess Jaray

This volume draws together ten important public commissions by Tess Jaray – one of Britain’s foremost painters and printmakers – through images, new and republished essays and an interview with the artist.

For over three decades, Jaray’s abstract painting and printmaking has been complemented by a series of public art projects that extends her investigation of architectural space and perspective, taking it out of the studio and into our shared spaces.

Considering the dynamics of form, pattern and colour, Jaray’s public art transforms its architectural surroundings with sequences of interlocking geometric shapes. Working primarily with materials such as brick, stone and metal, the forms of Jaray’s public squares are often held in an equilibrium of movement and stillness.

This publication features an essay by the art critic Charles Darwent that situates Jaray’s projects within the tradition of twentieth-century public art, an interview with the artist by Doro Globus, as well as historic statements by Richard Cork and Glyn Emrys, among others.

Charles Darwent is an art critic, writer and broadcaster. Chief Art Critic for the Independent on Sunday from 1999 to 2013, he now contributes regularly to the Guardian, The Art Newspaper, Apollo and Art Review, and has published works on Piet Mondrian and Josef Albers. Vivien Lovell is a visual arts curator who founded and directs public art consultancy Modus Operandi, whose clients include the BBC, St Martin-in-the-Fields and London's 2012 Olympics. Formerly the Publisher at Ridinghouse, Doro Globus is Managing Director at David Zwirner Books and is the author of 'Making a Great Exhibition', a book for children.

Tess Jaray was born in 1937 in Vienna, Austria, before coming to the UK in 1938 with her parents as part of the flight of Jewish refugees from the Nazis. The family settled in Worcestershire, where Jaray grew up. She studied at Saint Martin's School of Art from 1954 to 1957 and at the Slade School of Fine Art from 1957 to 1960. In 1964 Jaray started teaching at Hornsey College of Art, working there until 1968, when she took up a role as the first female art teacher at the Slade School of Art, where she taught for three decades until 1999. Over a distinguished career, Jaray has developed a practice that resists classification, despite sharing affiliations with minimalism, architectural drawing, Op Art and other movements. Her unique, pared-down visual language focuses on the possibilities of space and how to express this through the reduction and control of form. Today Jaray continues to innovate and expand her practice from her studio in north London.