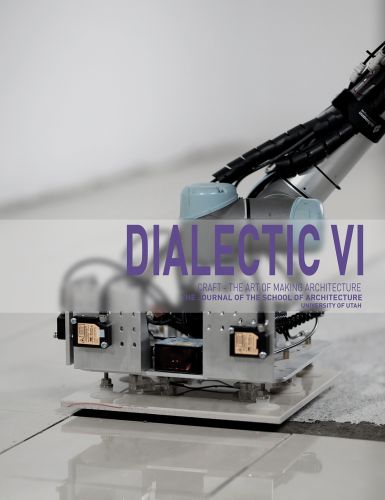 Craft - The Art of Making Architecture

The crafts, according to standard narration, have been in decline in Western societies since the weakening of guilds, the freedom of trade guaranteed by the French and American Revolution, and the rollout of industrialisation during the nineteenth century. Conversely, its endangered position in industrialised urban capitalism has transformed craft also into a site of resistance. With the digital update of the twenty first century, this issue of Dialectic asks for the critical potential of a discussion (reintroduction?) of the concept of craft into the maelstrom of contemporary spatial practice and current architectural thinking. Ten position pieces by international architects, activists, theoreticians, and makers approach the issue of ‘craft’ from dialectical perspectives. This is the debate about the current challenges and opportunities of the material, social, cultural, and aesthetic interrelationships of craft in architecture.

Shundana Yusaf is an assistant professor of Architectural History and Theory at the University of Utah. Her research juxtaposes colonial/postcolonial history with media studies, framing each as a force of globalisation. She is the author of Broadcasting Buildings: Architecture on the Wireless 1927-1945 (Cambridge: MIT Press, 2014). Her second book-length digital humanities project for the Society of Architectural Historians, is entitled Archipedia Utah (Charlottesville: Virginia University Press, 2016-2017). Her current book, supported by Fulbright, The Resonant Tomb in the Muslim World, 1250 CE to Present, studies the auditory landscapes of the Sufi shrines in Central and South Asia.

Ole W Fischer is an architect, theoretician, historian, and curator working on 20th and 21st century modern and contemporary and serves as an associate professor at the University of Utah. He lectured and published internationally on the history, theory, and criticism of architecture, amongst others in Archithese, Werk, JSAH, MIT Thresholds, Archplus, AnArchitektur, GAM, Umeni, Beyond, West 86th, Framework, and log. He coedited Precisions - Architecture between Sciences and the Arts (Berlin 2008), the catalogue Sehnsucht - The Book of Architectural Longings (Vienna 2010). He is the author of Nietzsches Schatten (Berlin 2012).