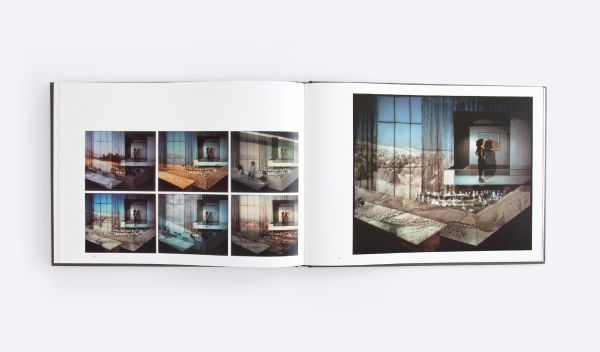 Distillations: Nancy Goldring Drawings and Foto-Projections 1971–2021 surveys 50 years of visual and conceptual explorations by artist and writer Nancy Goldring. Material is arranged according to predominating themes throughout her career: Thresholds, Sites, Sets, Perspectives, Dreams and Visions, and Chiaroscuro. The book reveals her unique process, how she devised her technique of melding graphic and photographic material through projection, and tracks its evolution from the sandwiching of black-and-white graphic and photographic images through to the creation of her “foto-projections” and large installation work. Included are interviews with the artist and an introduction by Jarrett Earnest with essays by writers and curators Paolo Barbaro, David Levi Strauss, Michael Taussig, and Ellen Handy.

Nancy Goldring was a founding director of Sculpture in the Environment (SITE, Inc.) from 1970-1973 where she wrote for On Site magazine and developed concepts for public art projects. A ground-breaking collaborative at the time, SITE strove to develop a way of conjoining art and architectural practice that would profoundly influence future developments in the area of public art.

Goldring was among the first to devise large scale, site specific, slide projection installations in the late 1970s and continued developing the medium to eventually include sound components. The installations were devised for museums (Southeast Museum of Photography, Lyman Allyn Museum, and the Houston Center of Photography) as well as gallery spaces. Her work has been associated with the avant garde architects of the 1970s whose major focus was on drawing, and in particular, those in Italy concerned with rendering design concepts rather than building them.

The core of her work is essentially a graphic one. Her experimental process of combining analogue images with graphic ones was groundbreaking (See Photography of Invention: American Pictures in the 1980s, Joshua Smith and Mary Foresta Smithsonian, 1989). This kind of collaging was later adapted by photoshop but produces very different results. In retrospect her work seems prescient. Goldring was among the very few women working between art and architecture in the early 1970s, and in many ways helped to open the area for more women.