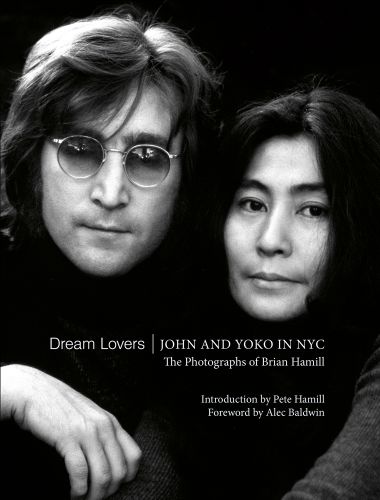 The Photographs of Brian Hamill

“These photos are stunning, bittersweet visions of a past shared by all of us.“ – Tom Hanks.

“Brian Hamill is best known as a still photographer and a photojournalist. But I’ve always regarded him – first and foremost – as a master portraitist. And this book bears that out – capturing as it does, the many-faceted phenomenon that was John and Yoko – artists, lovers, cultural comrades and – most elusively – business partners. Behind his camera, Hamill is something of a phenomenon himself.” – Richard Price

John Lennon’s life, death and music shaped the world. His reputation as a philanthropist, political activist and pacifist influenced millions worldwide. If Elvis was King, Lennon was his rightful successor – and fittingly, several images in this collection of both classic and unseen photos show him wearing a diamond-studded ‘Elvis’ pin over his heart, in homage to his forefather on the throne of Rock ‘n’ Roll. John Lennon is seen here in several sessions in New York, performing on stage, relaxed at home and walking on the street with Yoko Ono.

Renowned celebrity photojournalist Brian Hamill delivers his own insider view of this Beatles icon, through intense, intimate photographic portraits and insightful text. Whether Lennon is dominating the stage, posing on the roof of the Dakota building, or relaxing with Yoko Ono, Hamill’s photography takes this quasi-mythical figure from the world of Rock ‘n’ Roll and shows him as the man he really was.

“Brian looked at the John Lennon who had become an icon and saw instead a familiar face. He saw a working-class hero like those that built the City of New York. And so when John Lennon came to live in New York, Brian captured him as a New Yorker, in the joyous images that you will find in this book.” – Pete Hamill

“Lennon, one of the most famous men in human history, wanted to live as one among many. Of course, he hit it off with Hamill. The guy that flew so high needed some oxygen. Hamill is fresh air. His folio of Lennon images shows Lennon focused, present, but edgy, never relaxed.” – Alec Baldwin

About the Author
Brian Hamill has been photographing icons of popular culture for over 50 years. His photojournalism career began in the 1960s; since then he has assisted leading fashion photographers, covered the Troubles in Northern Ireland for The New York Times Magazine, and worked as a unit still photographer on over 75 motion pictures. His photographs have been shown in numerous solo exhibitions across North America, and in London and Italy. Many major magazines have published his work, including Life, Time, Newsweek, Vanity Fair, Esquire, Rolling Stone and The Saturday Evening Post.
Look Inside
Specifications