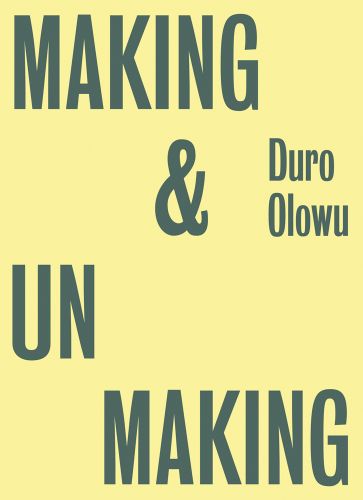 From Bauhaus jewellery and West African textiles to contemporary portraiture and sculpture, this unique volume explores the rituals of making that underpin an artist’s work.

Accompanying an exhibition curated by the groundbreaking Nigerian-born British fashion designer Duro Olowu at Camden Art Centre, London, this book offers the opportunity to re-evaluate art and textiles from the nineteenth-century to the present.

Olowu selects material by more than 60 artists from around the world, including rarely seen works by Anni Albers, Wangechi Mutu, Alice Neel, Chris Ofili and Irving Penn, and newer paintings by Lynette Yiadom-Boakye. By setting up unexpected dialogues between historic and contemporary artists working in a myriad of media – textile, painting, sculpture, photography and collage – Olowu reveals a shared preoccupation with themes of gender, race, beauty, sexuality and the body.

The volume includes an in-depth conversation between Olowu and artist Glenn Ligon, along with texts by Jennifer Higgie and Shanay Jhaveri, that together highlight the intricate layers of history and place that influence the making of art.

Jenni Lomax is a curator and writer who served as Director of London's Camden Arts Centre from 1990 to 2017. She was made Chevalier de l'Ordre des Arts et des Lettres in 2008 and awarded an OBE in 2009 for services to the visual arts.

Jennifer Higgie is a writer and art critic living in London. Until 2019, Higgie was Editorial Director of frieze, where she had worked since 1998. Shanay Jhaveri is Associate Curator, International Modern and Contemporary at the Metropolitan Museum of Art, New York, and a Contributing Editor at frieze.

Duro Olowu (b.1965, Lagos) is a celebrated fashion designer whose bold innovations with pattern, colour and shape reveal his early influences living between Nigeria and Europe. He was the Curator of Making & Unmaking at Camden Art Centre, London, and the 2020 exhibition Duro Olowu: Seeing Chicago at the Museum of Contemporary Art, Chicago.

Glenn Ligon is a conceptual artist living and working in New York City. His work has been exhibited internationally, including at the Venice Biennale (1997 and 2015), and in 2021 he was elected a member of the American Academy of Arts and Letters.