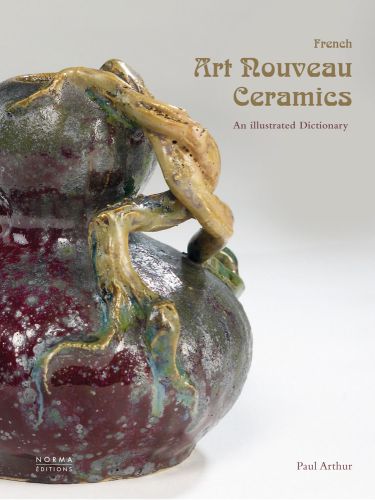 This book is a unique and comprehensive illustrated dictionary of French Art Nouveau Ceramics.

A census conducted in 1901 indicated the existence of some 209 producers of pottery in France, employing a total of around 5,800 full-time labourers. This great activity stimulated a parallel development in the arts, including the search for new expressions in art pottery, giving birth to l’art nouveau, a great and eclectic synthesis of a number of other art styles. Largely through British arts and crafts, and the work of artists like the Manxman Archibald Knox, it reached far back into the prehistory of Celtic art. To this were added later medieval elements, through the gothic revival championed by William Morris.

The need for renewal, breaking away from the neo-Classical and academia, which was the realm of the upper-class culture, was largely theorised by John Ruskin, who searched elsewhere for inspiration. Thus did British art nouveau also partake of Chinese and Japanese styles, though never in so forceful a manner as did the French aesthetic. France, on the one side, looked back to the swirling and frivolous eighteenth century Rococo, primarily through the influence of the Goncourt brothers, Edmond and Jules, influential aesthetes of the mid-nineteenth century.

The book focuses especially on artists working stoneware or grès, faience, and terracotta. It aims to provide a general survey of the many artists working in these areas, and includes brief accounts of the ceramics work of sculptors and painters whose wider output is already well known.

About the Author
Paul Arthur is a professor at the University of Salerno, and Director of the Post-Graduate School in Archaeology. His main research interests concern medieval settlement formation and development, landscape studies and human ecology, medieval chronology, as well as ceramic studies. He has developed a special interest in French art nouveau ceramics, giving attention to lesser-known ceramic artists and ateliers including the Atelier de Glatigny and Alfred le Chatelier, the Baudins, Delbet, the ceramics edited by Leonce Moline (Galerie Lafitte), Jules Wolf, and others.
Specifications