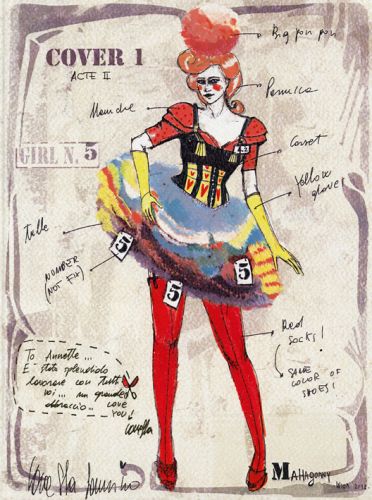 The Magic World of Costumes

“Lois Lammerhuber, a veritable alchemist of photography, lets you feel the passion, single-mindedness and skill at work in the costume workshops, from the process itself to the finished piece. He illustrates Annette Beaufaÿs’ universe as one of the real cabinets of wonder for today” Der Standard

Glamour opens up a magical world of transformations, full of grace and beauty and fairy-tale elegance, in the costume workshops of ART FOR ART in Vienna. Annette Beaufaÿs has headed the workshops for the past 20 years and allowed photographer Lois Lammerhuber into this dream factory. He attended the manifold minute processing steps necessary to create a work of art fit for the stage, made from original designs by highly skilled and experienced tailors, milliners, shoemakers and painters. The book also shows how some of the world’s greatest opera stars, like Edita Gruberova, are trying on their costumes with a sense of curiosity, or how some of the most talented costume designers, like Sue Blane – who created the costumes for the Rocky Horror Picture Show – develop their designs with passion and skill.

Annette Beaufaÿs has been responsible for the costume design for over 120 theatre, opera, film and TV productions in Europe, Japan and China. She has worked with directors such as Axel Corti, August Everding, Dietmar Pflegerl, Elke Lang, Philippe Arlaud, but also time and again with André Heller. Her designs produced for the New Year's concert, the opera ball and productions of the Staatsoper and the Volksoper have earned her a reputation in the cultural landscape of Austria. Annette Beaufaÿs has headed the costume workshops of the Österreichische Bundestheater (Austrian Federal Theatres) since 1993. On 23 January 2008, Annette Beaufaÿs was awarded the honorary title of "Professor" by federal minister Dr. Claudia Schmied. Lois Lammerhuber's photographs are in demand around the world. Lois Lammerhuber has been a member of the Art Directors Club New York since 1994. Since 1996 he has also worked successfully as publisher and co-publisher of books. He has published 90 books, 3 000 reportages and numerous covers, and has won more than 50 international awards. In 2012 the Photographische Gesellschaft Wien honoured him with the Golden Society Medal for special photographic expertise. Dominique Meyer was born in 1955 in Thann, Alsace. He is a leading French economist, manager and cultural advisor. In 2007 he was offered the directorship of the Vienna State Opera. He took up office in September 2010.