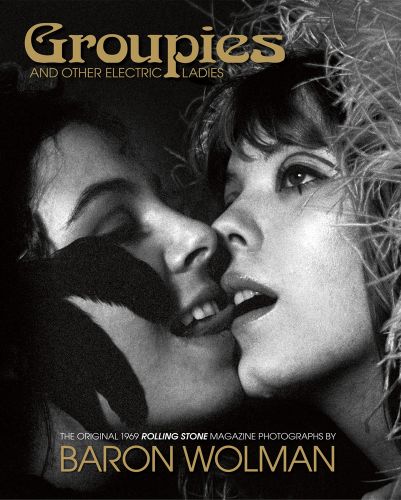 “Mr. Wolman’s view of the women as style icons comes into sharp focus thanks to a new coffee-table book, Groupies and Other Electric Ladies. It collects his published portraits along with outtakes, contact sheets, the original articles from the issue and new essays that put the subjects into a modern context. The thick paper stock and oversize format emphasizes Mr. Wolman’s view of the groupies as pioneers in hippie frippery.” New York Times Style section
“…style and fashion mattered greatly, were central to their presentation, and I became fascinated with them… I discovered what I believed was a subculture of chic and I thought it merited a story.” Baron Wolman The 1960s witnessed a huge cultural revolution. Music was at the heart of a new generation’s rallying cry for love, peace and harmony – from small clubs to giant festivals like Woodstock. With men predictably dominating as musicians and performers, the women and girls backstage started to explore their own forms of liberation and self-expression. They became better known as the Groupies – offering their allegiance to the music, and the artists who made it. On February 15, 1969 Rolling Stone magazine released a ‘Special Super-Duper Neat Issue’ called ‘THE GROUPIES and Other Girls’ featuring the work of their chief photographer, Baron Wolman. It would turn out to be a sensational milestone, making instant celebrities of the women featured. With this single issue, the Groupies had arrived. They emerged as extraordinary women, whose lifestyles divided opinion and remain controversial. Some became models, actresses, writers, artists and musicians – the GTOs, the original ‘Groupie band’ admired and encouraged by Frank Zappa, is featured here. Others fell into obscurity. Now, over 45 years later, ACC and Iconic Images are proud to publish the photographs of Baron Wolman in a single volume for the first time. Groupies and Other Electric Ladies features more than 150 images, including previously unseen out-takes and contact sheets, and comes complete with the original Rolling Stone text, as well as interviews with several of the women today.

About the Author
Baron Wolman began the music phase of his photographic career in 1967, as the very first photographer for the new Rolling Stone magazine. He went on to capture the 60s pop rock explosion, including: Janis Joplin, the Rolling Stones, the Who, Jimi Hendrix, Pink Floyd, Bob Dylan amongst many more. "I see myself as a kind of voyeur ... I'm happiest when I'm invisible and watching. I just love to watch. I'm a chameleon and can adapt myself to the situation, and that, to me, is one of the gifts that I was given naturally, and that's how you get honest pictures."
Specifications