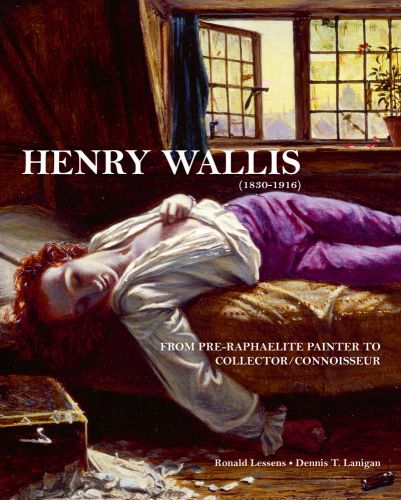 From Pre-Raphaelite Painter to Collector/Connoisseur

Amazon UK Book Depository Bookshop UK Hive Waterstones
Log in to add this to your wishlist.
Share This Book...
Full Description
“An invaluable resource a delightful and compendious opus.” – The Pre-Raphaelite Society Review

The Death of Chatterton hangs from the wall of the Tate Britain, a resplendent depiction of tragedy. This is the canvas that earned Henry Wallis his lasting legacy. It embodies the Pre-Raphaelite aesthetic, from its morbid subject (Thomas Chatterton, a precocious 18th-century poet who poisoned himself to escape poverty, aged only seventeen), to its vibrant colourwork and detailed naturalism, characteristic of the first phase of Pre-Raphaelitism. Despite this, no significant study has been dedicated to Wallis – until now.

Henry Wallis: From Pre-Raphaelite to Collector/Connoisseur – delivers the first comprehensive appraisal of this often-overlooked Pre-Raphaelite. Composed of three parts – a biography, a catalogue raisonné and a series of important appendices – this book demonstrates the full range of Wallis’s contributions to the world of Victorian art. The biography acknowledges Wallis’s expertise as a colourist and draughtsman, while paying respect to his lesser-known accomplishments as both collector and connoisseur. The Illustrated Catalogue gathers every identifiable work in the painter’s name – of which there are many, including The Stonebreaker: Wallis’s other great masterpiece. Finally, the appendices present a selection of correspondence between Wallis and various members of the Pre-Raphaelite circle – William Holman Hunt, Frederic George Stephens, Dante Gabriel Rossetti, William Bell Scott, Arthur Hughes, Edward Burne-Jones and William Morris. A pioneering exploration of the artist and the man, Henry Wallis will be at home on the bookshelf of any Pre-Raphaelite enthusiast.
About the Author
Dr Dennis T. Lanigan is a well-known Pre-Raphaelite collector. He has written articles for the Journal of Pre-Raphaelite Studies and the Review of the Pre-Raphaelite Society. Ronald Lessens, after studying philosophy at the University of Louvain-la-Neuve (Belgium), has published numerous books and articles on European intelligentsia, including William Herschel, Virginia Woolf and Henry Wallis.
Look Inside
Specifications