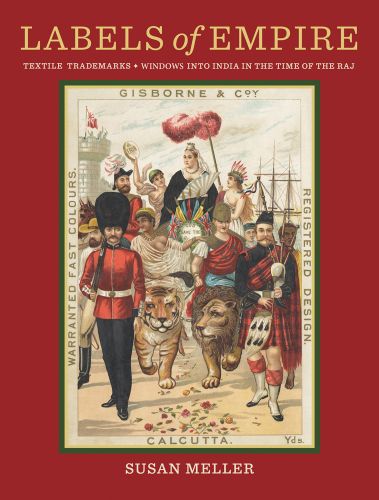 Textile Trademarks: Windows into India in the Time of the Raj

At one time Great Britain clothed the world. In the 1880s, when the British textile industry was at its height, 85 percent of the world’s population wore clothing made from fabric produced in the mills of Lancashire. From 1910 to 1913 alone, seven billion yards of cloth were folded, stamped, labeled, and baled. Most of this output was for export, and 30 percent of it went to India.

British textile manufacturers selling into the competitive Indian market were dealing with a largely illiterate population. In order to differentiate their goods, they stamped their cloth with distinctive images—a crouching tiger or perhaps an elephant standing on top of a globe. When chromolithography came into widespread use in the late 1800s, illustrated paper labels (known in the trade as “shipper’s tickets”) made to appeal to the local people were added. Designed, printed, and registered in Manchester, these brightly colored images were pasted onto the pieces of cloth being sold, further helping to establish a company’s brand. Hindu gods, native animals, scenes from the great Indian epics—the Mahabharata and Ramayana—and views of everyday life were common subjects. In a sense a form of premium, they provided the consumer with an additional incentive to buy the goods of a particular firm.

Labels of Empire begins with the late 19th-century heyday of British textile manufacturing and closes with Indian independence in 1947. By combining visual narrative, popular culture, and magical realism in a way never done before, this book offers an unprecedented look at the British textile industry in the time of the Raj—and its remarkably successful use of paper labels as trademarks.

Susan Meller has been collecting and studying textiles for more than 50 years. In the 1960s, she worked in the New York textile industry as a designer and strike-off artist for Riegel Textile Corporation, Dan River Mills, and other fabric converters, traveling to their mills in South Carolina and Georgia to supervise the printing of their fabrics. This early experience gave her an invaluable insight into working operations of what were still, in many respects, 19th-century mills and mill towns. She later founded and created the Design Library (www.design-library.com), formerly in New York City and now located in a converted textile factory in Wappingers Falls, New York. With over 5 million designs, the Design Library is the largest and most extensive commercial archive of period textiles and original textile designs in the world.

Susan Meller is co-author of Textile Designs: Two Hundred Years of European and American Patterns (Abrams, 1991); author of Russian Textiles: Printed Cloth for the Bazaars of Central Asia (Abrams, 2007) and Silk and Cotton: Textiles from the Central Asia that was (Abrams, 2013; La Martinière, 2013); and contributing author to Colors of the Oasis: Central Asian Ikats (The Textile Museum, 2010).

She lives in Berkeley, California with her husband Frank Rubenfeld.