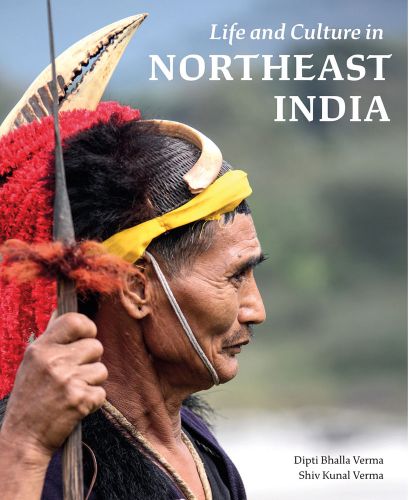 Life and Culture in Northeast India

An abundantly illustrated journey through one of the world’s most diverse and fascinating regions.

Although India’s northeastern administrative region makes up only eight percent of India’s land area, it is home to some 140 indigenous tribes, each with its own unique culture. The terrain, predominantly hilly, ranges from snow-capped peaks to tropical rainforests. Now, for the first time, noted authors and filmmakers Dipti Bhalla Verma and Shiv Kunal Verma provide a comprehensive introduction to this little-known yet captivating part of the world.

Verma and Verma conduct us from the towering Kanchenjunga massif in Sikkim to the tea plantations of Assam, to the astonishing biodiversity of Arunachal Pradesh, to the martial tribes and Baptist churches of Nagaland, to the birthplace of polo in Manipur, to the living root bridges of Meghalaya, to the farms nestled among the hills of Tripura and Mizoram. They take us into the lives of the many peoples of these eight states, who maintain their traditional customs and beliefs even in the face of growing ecological threats.

Featuring more than 300 colour photographs and several detailed maps, Life and Culture in Northeast India will be an essential volume for anyone interested in the peoples and places of Planet Earth.

About the Author
Dipti Bhalla Verma and Shiv Kunal Verma, founders of the production company KaleidoIndia, are responsible for numerous films and books about India's armed forces, wildlife, and people.
Specifications