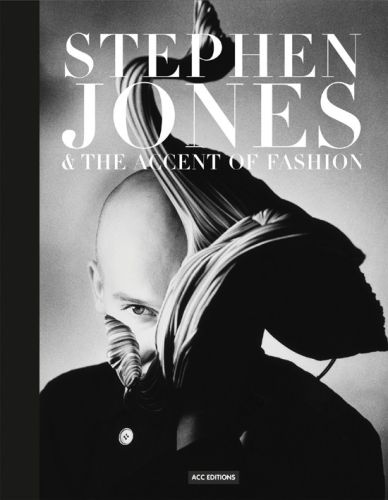 And the Accent of Fashion

Amazon UK Book Depository Bookshop UK Hive Waterstones
Log in to add this to your wishlist.
Share This Book...
Full Description
“Picture the moment, in the run-up to a Christian Dior haute couture show. John Galliano is working silently in the Paris studio with his friend and ally, the master milliner Stephen Jones. The designer is looking at the arc of a silhouette, the drape of a skirt and the tilt of a hat: ‘I often work through a mirror for most of my decisions and I always see Stephen’s reflection,’ says Galliano. ‘He is reading my every nuance. He is studying my face. I don’t need to say anything – he can read my mind’.” – From the essay by Suzy Menkes.
Stephen Jones is one of the world’s most talented and distinguished milliners. This exquisitely illustrated monograph is the first to examine his illustrious career and famous collaborations. Including photographs from private collections and museums, the book focuses on a variety of aspects of his work, from his collaborations with Boy George, John Galliano and Thierry Mugler to his work with photographers Bruce Weber and Nick Knight. Recent collections include: Marc Jacobs, L’Wren Scott, Giles Deacon, Gareth Pugh, Loewe, Christian Dior Haute Couture, Prêt-à-porter, Ski & Baby collections, John Galliano, Comme des Garcons. His recent commissions include: Dita von Teese/Crazy Horse, Bryan Adams, Immodesty Blaize, Take That, Sex and the City 2, Perrier Jouet, Printemps, Ascot, Disneyland, Kylie Minogue, Kate Moss/Met Ball.

“With her moulded felt cloche shadowing an eye and pinned with a tremblant diamond cow-parsley sprig, Nadja Auermann, slinking down the stairs of a crumbling Hotel Particulier in Paris for the John Galliano show, defined the fashion moment. Once again, Stephen Jones, millinery magician, had summoned up the spirit of the day. Jones is a deft conjurer, who can draw whimsy from a hat. Steeped in couture lore and craft, he nevertheless propels his art into the future with his ceaseless invention and thistledown touch. His genius is to enhance the mystery, allure, wit of the wearer – although a Jones hat might be a dramatic statement in itself, it will never overpower.” – Hamish Bowles, Style Editor, Vogue USA
About the Author
Hamish Bowles is an editor of 'Vogue' and an authority of fashion and interior design. He has been a costume designer for video clips and films; in this capacity he writes on Stephen Jones' work.
Specifications