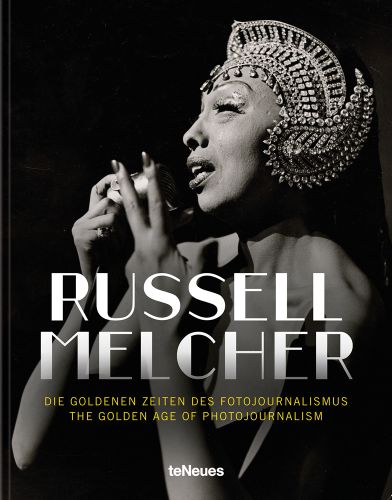 The Golden Age of Photojournalism

Russell “Russ” Melcher came to Europe and photographed the superstars of the time, either during their visits to Paris and France or accompanied them on worldwide trips. He witnessed many world events from film festivals to terrorist attacks. Among the portrayed were royal families like the Windsors, Grace Kelly & the Monegasques, as well as film legends like Romy Schneider, Alain Delon, Burt Lancaster, Erol Flynn, Alfred Hitchcock, Sofia Loren, Brigitte Bardot, and music legends like Frank Sinatra, Elvis Presley, Harry Belafonte, and Yves Montand. In addition, there were political greats such as Charles DeGaulle, Fidel Castro, Nikita Khrushchev, the Shah of Persia, American presidents, and many more. Later Russ Melcher became director of the legendary photo agency MAGNUM and worked with photo legends Robert Capa, Henry Cartier-Bresson, Ian Berry, Bruce Davidson, Elliott Erwitt, to name a few.

This large-format photo book is about the stories behind the images and personalities. Entertaining, humorous, but also profound, Russ describes his way to the perfect photo, his individual perspective, up to the importance of photographic storytelling of this ‘Golden Age of Photojournalism’. Russ Melcher is an important witness to that time, but also an American entertainer in Paris who encouraged his protagonists to do things that few photographers could manage, a true and trusted partner to the stars of that era through the ages. The book is organised according to the two decades and Russell’s encounters with the stars of the time.

Russell Melcher, born in 1931 in the USA but living and travelling in Paris most of his life, was a photographer (from 1953 to 1962) and photo agent (MAGNUM director, etc.) and an important witness of the heyday of visual world exploration. This 'golden age of photojournalism' was characterised by a strong self-image of photographers as authors and storytellers, by high-circulation magazines such as Life, Time Magazine, Paris Match, Spiegel, Stern, etc., and by a readership for whom these reportages represented the keyhole to viewing the world.