In trockenen Tüchern. Woven and embroidered items from the Ottoman Empire.

On November 17, 1922, Sultan Mehmed VI left. Vahideddin the city of Istanbul boarded a ship and sailed into exile. After more than 700 years, the Ottoman Empire (1299-1922) ended, which at its greatest extent stretched across the continents of Africa, Europe and Asia.

Finely embroidered textiles are among the highlights of Ottoman art. Embroidered pillowcases and wall hangings defined the interior, decorated tablecloths and serviettes refined the meals, and the embroidered towels played an important role in the weekly visit to the hammam. Cloths made of linen or cotton fabrics, particularly finely decorated with silk and metal threads, in combination with everyday objects, also enhanced the everyday activities of the urban elite, for example when receiving visitors in their own homes.

The names of the manufacturers have rarely been handed down. For the court and the wealthy residents of the cities, a professional guild of male embroiderers worked, urban embroiderers mass-produced high-quality work. A significant proportion of the embroidery was made in-house based on templates for personal use and special occasions such as dowries. In Anatolia, woven textiles with blue and red weave patterns were also made for this purpose.

The exhibition In Dry Cloths. Woven and embroidered items from the Ottoman Empire show cloths from the 18th to 20th centuries. The textiles shown are finely decorated with blossoms, fruits or architectural elements and are artistically handcrafted. Its special feature lies in its versatility: the front and back are made with the same care and serve equally as display sides.

Based on around 70 cloths and everyday objects from the Werner Middendorf and Ulla Ther collections as well as the museum’s own holdings of the Five Continents Museum, the exhibition offers insights into various areas of life of the inhabitants of the Ottoman Empire. 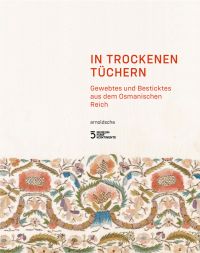