Robert Capa. L’opera 1932-1954 , at Roverella, from 8 October 2022 to 29 January 2023, curated by Gabriel Bauret, is the new appointment with international photography proposed by the Fondazione Cassa di Risparmio di Padova e Rovigo, once again in collaboration with the Municipalità di Rovigo and the Accademia dei Concordi. The exhibition, which follows Robert Doisneau’s recent one in quality and originality, presents 366 photographs selected from the archives of the Magnum Photos agency and traces the main stages of his career, giving the right space to some of the most iconic works that have embodied the history of twentieth century photography. However, it is not conceived only as a retrospective of Robert Capa’s work, but rather aims to reveal through the images proposed the facets, the minimal folds of a passionate and ultimately elusive, insatiable and perhaps never fully satisfied character, who does not hesitate to risk his life for his reportages. In fact, Capa has always shown a player’s temperament, a free player. In taking pictures, he also tries to understand, revolves around the subject, both literally and figuratively. The exhibition brings together several points of view of the same event on different occasions, as if to reproduce a movement of field-counter-field, and returns a cinematic breath often perceptible in many sequences. 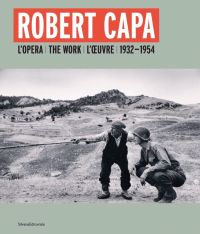