Since 1965, the Gesellschaft für Goldschmiedekunst e.V. and the Deutsches Goldschmiedehaus Hanau have been organizing the Silver Triennale International to promote contemporary silversmithing. The competition promotes new design ideas for silverware, silver objects and cutlery. Through the presentations at home and abroad, the Silver Triennial has become a world-renowned series of exhibitions.

In the 20th edition of the global competition, the number of applications and the variety of works submitted reached an impressive level: 121 silversmiths from 21 countries submitted objects that fulfill a function, such as cutlery or pots, as well as free works. The latter may refer to a function, but no longer fulfill it or have completely detached itself from a functional reference. It is particularly noteworthy that the applicants no longer only focus on technical and artistic aspects. Many of the pieces have a socio-critical and contemporary background, they refer to the war in Ukraine, take a stand on the unequal distribution of resources or set an example for the need for a circular economy. Life during the pandemic inspired artists to create pieces for themselves and loved ones, or to process psychological and mental stress in silver objects. Renowned designers as well as young artists submitted their works for the main competition or for the young talent competition (born 1987 and younger). All works were to be made of silver, other materials were only permitted as supplements. Students and trainees were allowed to submit silver-plated pieces, unique pieces and prototypes for later serial production were also allowed.

The expert jury included: Dirk Allgaier, publisher of arnoldsche Art Publishers, Stuttgart, Dr. Claudia Banz, curator of design at Kunstgewerbemuseum Berlin, and JaKyung Shin, silversmith and assistant professor at Seoul National University, Korea. They selected the 67 most innovative and masterfully executed entries for the exhibition and decided on a total of eight prizes worth 20,000 euros in the main and young talent competitions. Thanks are due to the generous support of the award sponsors: Fa. Hanauer Schmuckhalbzeug; Heimerle + Meule, Pforzheim; Lions Club Hanau; Robbe & Berking, Flensburg, and estate of the master goldsmith Ebbe Weiss-Weingart.

Markus Pollinger (DE) received first prize in the main competition with the Ebbe-Weiss-Weingart Prize for his “Vessel 2020”. The jury justified its decision as follows: “The vessel is characterized by a free, ironic use of silver as a material, which is contrasted with steel. The technical virtuosity is evident in the details, such as in the elaboration of the body of the vessel and the visualization of the weld seams.” David Huycke (BE) received the Robbe & Berking Prize for “Cosmic Bubbles”: “The object was made using the blow-up technique convincingly implemented, the sculptural appearance shows a clear proximity to fine art. The high-gloss polished surface of the “Cosmic Bubbles” contrasts with the matt, black surface of the base, and the impression of lightness and heaviness is played with.” Maja Houtman (NL) was chosen for her objects “Sphere I, II and IV” was awarded the Ebbe-Weiss-Weingart Silver Prize: “The textile structure shows the high level of craftsmanship and its technical advancement. When using the wire, a flowing movement is created that gives the objects lightness and transparency at the same time.”

HyeSun Lee (KR) received the 1st Lions Club Hanau prize in the young talent competition for her “Hand-Lighthouse”. The jury was impressed by the transformation of an everyday device into a sculpture: “Silver is combined with plastic recycled from the sea and shows an exciting discourse on the subject of material resources. The light object can also be understood as a warning light and thus as a socially critical statement.” Koichi Io (JP) was awarded the 2nd Lions Club Hanau Prize for his monumental “Three-legged Vase”. This impresses “through the craftsmanship involved in raising a large body with a hammer. The irregularly worked, polished edge gives the vessel a special accent”. Merit Christan (DE) is honored with the 3rd Lions Club Hanau Prize for her work “Born with a silver spoon”: “The conceptual, socially critical approach is implemented with the design of the oldest eating tool, a spoon. Playing with the non-functional variations of a spoon is intended to illustrate the different ways in which our society takes part in eating.” JaeHui Jeong (KR) won the Hanau semi-finished jewelery silver prize with her “Hidden Object”: “The classic vase plays with round and square shapes. The hide-and-seek game of the geometric elements creates an unusual, emphatically constructive design.” The Heimerle + Meule Silver Prize went to Kazuhiro Toyama (JP) for “Biophilia”. In the object, “the classic silver craft with the perfect surface […] is thwarted by experimenting with the thermal spray technique. Cracks and breaks become visible and the stability of the vessel is lost. This new approach to silver design can also be interpreted as an allusion to the fragility of our society.”

In addition to accompanying texts, the bilingual catalog (German/English) from arnoldsche Art Publishers, Stuttgart, shows the award-winning works and all submissions selected for the exhibition. The publication is published with the kind support of MTV Förster, Hanau, C. HAFNER, Pforzheim, Mannheimer Versicherung, Robbe & Berking, Flensburg, the city of Hanau, Stadtwerke Hanau and the Sparkasse Hanau Foundation. It can be purchased at the goldsmith’s house for the special price of €25. 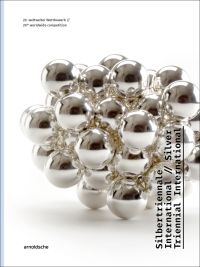