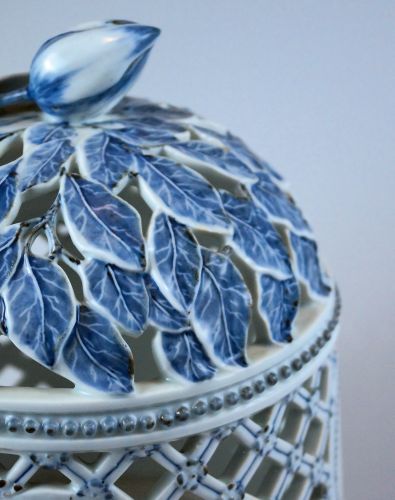 This detailed two-volume set offers an unparalleled scholarly insight into the history of Danish porcelain. Now renowned for its ceramic industry, Denmark earned its status as a leading porcelain exporter through intense rivalry with firms in Russia and across Europe. With its factories excelling time and time again at the largest international expositions of the 19th and early 20th century, porcelain placed Danish culture on the map.

Founded in 1775, Royal Copenhagen remains one the oldest porcelain manufacturers still in operation today. Throughout its history, the factory has experienced numerous highs and lows, and has weathered more than 130 years of competition from the Bing & Grøndahl Porcelain Factory. After 1882, the two factories were located less than a mile apart, with their flagship stores eventually competing side-by-side for sales in the heart of Copenhagen.

Danish Porcelain was inspired by a two-generation collection of porcelain, stoneware and faience from Royal Copenhagen and Bing & Grøndahl, initially gathered by the author’s father in 1947. Developed over the past 20 years, this is the first comprehensive publication to critically review the history of both factories, from their beginnings to their eventual merger. Featuring detailed appendices and almost 2000 pictures, these two volumes provide an informative guide to the history of Danish porcelain, including the many technical and artistic successes of the late 1880s that revolutionised production worldwide.

Dr. Elliot Todd is a second-generation collector of Danish porcelain, stoneware and faience from the factories of Royal Copenhagen and Bing & Grøndahl. Having received his B.S., M.S., and Ph.D. degrees from the University of Wisconsin, he is now a professor at a leading American university. An internationally recognised researcher and educator in his field.