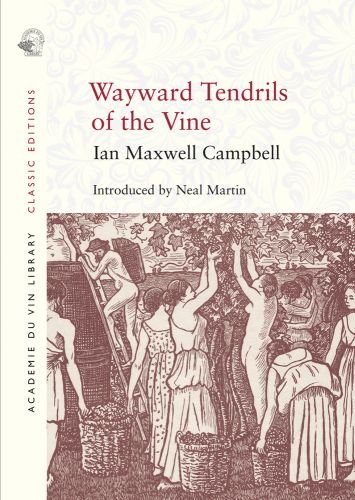 Wayward Tendrils of the Vine

Writing in the immediate aftermath of World War II, wine merchant, gentleman soldier and cricketer Ian Maxwell Campbell casts an affectionate and occasionally wistful look back at the Golden Age of wine, when Bordeaux was affordable, Burgundy’s finest vintages tended towards cannibalism and other wines could be… well, surprisingly attractive. Among the tales of convivial drinking and anecdotes involving Winston Churchill and WG Grace, the author paints a vivid picture of a pre-war (and pre-phylloxera) wine world whose horizons were about to expand beyond all imagining.

Wayward Tendrils of the Vine, though, is much more than a collection of reminiscences. As Neal Martin points out in his Introduction: “The title alone is a perfect allegory for how we learn about wine, how knowledge grows organically over time, never knowing what the next bottle will teach us, how it might alter preconceptions or where it might lead.”

Ian Maxwell Campbell was born in London in 1870 and went on to play first class cricket for London Country, the MCC and Middlesex (where he claimed to have bowled out the illustrious WG Grace on two occasions). During the First World War he served on the Western Front with the Argyll and Sutherland Highlanders, reaching the rank of Lieutenant Colonel. Following his retirement from the Army in 1929, Campbell became a wine shipper and was twice chair of the Wine and Spirit Association, where he spent much of his time fighting government tax increases. Wayward Tendrils is the first and most famous of his two wine-related memoirs. He died in Chesham, Bucks in 1954 at the age of 83.

Neal Martin is a highly regarded wine critic and author, and Senior Editor of Vinous.